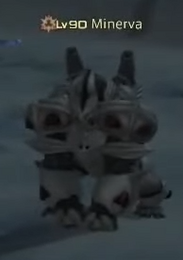 Minerva is a Rank A Elite Mark found in Garlemald.

The Studium's engineers are currently developing a machine capable of operating in freezing temperatures, and have requested the procurement of a certain warmachina to aid in their project─Minerva. Don't be fooled by the familiar name─this is a cold and unfeeling magitek avenger prototype that we are discussing. From what I understand, the machine was affectionately named after its creator's daughter. Which gives rise to the question─what kind of parent gives a magitek weapon modeled after the sasquatch the same name as their daughter!? Perhaps there is some manner of Garlean tradition here to which I am not privy...but I daresay dismantling the thing would be doing the poor child a favor.

Do Not Sell My Personal Information
Retrieved from "https://ffxiv.consolegameswiki.com/mediawiki/index.php?title=Minerva&oldid=358289"
Categories: