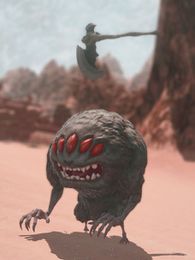 Juggler Hecatomb is a Rank B Elite Mark found in Amh Araeng. 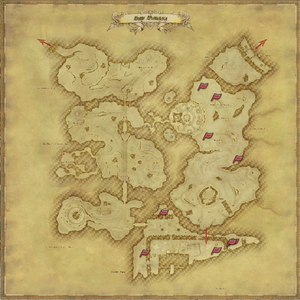 Whirl of Rage does telegraph, but too late for you to avoid it. You need to know what the cast does and avoid it before you see the circle AoE appear.

This all dates back to when Nuvy's Leavings was still bustling with activity. The tunnels were dark─as tunnels generally are─and children kept stirring up trouble with rumors that they'd been seeing ghosts. Ghosts of miners who died in a cave-in after digging too deep, or poor put-upon laborers tasked with hauling materials back for potters─all kinds of silly stories and then some. Recently, however, this musty old tome came to light. Belonged to a mage of Nabaath Areng, who kept detailed records of his experiments. Apparently he decided to condemn one such “experiment” to a particularly deep tunnel, right around the time the whispers of ghosts first started. So that there's your logical explanation, if you're looking for it. A misshapen fiend that shouldn't be has been stirring up trouble for years and years. Or it's been killing folks for years and years, and ghosts are real. You tell me.

Do Not Sell My Personal Information
Retrieved from "https://ffxiv.consolegameswiki.com/mediawiki/index.php?title=Juggler_Hecatomb&oldid=274718"
Categories: