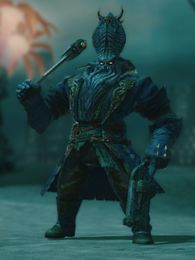 Gunitt is a Rank S Elite Mark found in The Tempest. 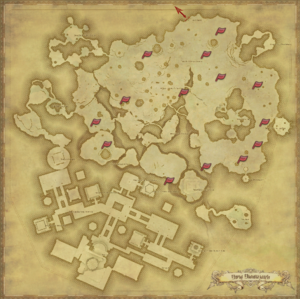 Gunitt was like most other dwarves of Kholusia─tough, hardworking, tiny. By all accounts he was content with his lot, until one day he spied a Galdjent three times his size strolling through the market, and decided he'd make himself tall or die trying. So he travels the world, amasses all kinds of treasure, then pays a visit to a Nu Mou hermit who claims he can make his dreams come true, and would you believe it? Gunitt gets his wish! But then, in his greed, he steals the treasure sack off the table and runs off before the hermit can protest. 'Course he was a damn fool to try, cause the hermit gets their own back in the end. Curses Gunitt and transforms him into a twisted fiend for his avarice. Also sank his ship while he was making his escape for good measure. And so Gunitt was consigned to the bottom of the sea where he has wandered to this day. They say his covetous nature still rules him, as when the denizens of the depths attempt to consume their prey, he will appear to steal it out from under them.