Vulpangue is a Rank B Elite Mark found in Il Mheg. 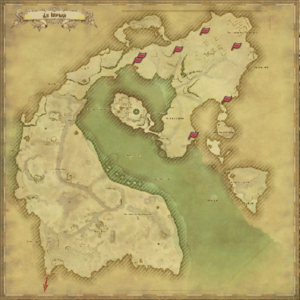 Never heard of Vulpangue? Tales of its exploits were recorded in the annals of the Kingdom of Voeburt. Their naturalists described it as a serpent of unusual size that was rather docile that subsisted on a diet of bugs and butterflies... But do not be deceived, for the creature fellow Nutters observed was anything but docile! Nay, it was both swift and ruthless when it spied a poor pixie out on a midday stroll and snatched it out of the air, swallowing it with a single gulp! One of the fae folk, brimming with all kinds of powerful magicks, gobbled up in a flash! No common beast could do that, could they? Could they!?

Do Not Sell My Personal Information
Retrieved from "https://ffxiv.consolegameswiki.com/mediawiki/index.php?title=Vulpangue&oldid=221215"
Categories: