Deacon is a Rank B Elite Mark found in The Tempest. 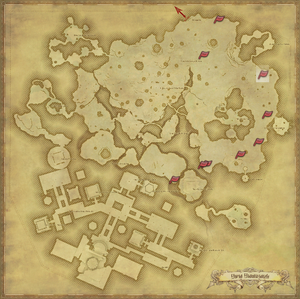 Before the Flood, the Ondo had turned up all kinds of ruins deep in the ocean. Some of them saw deeper meaning it─religious meaning. But like the Church of the First Light and many other traditions, much of that was lost with the coming of the White. Apparently one of those defunct traditions worshipped a great crab, Deacon. Perfection incarnate that surpassed man and Ondo alike, a venerated being that would guide the faithful unto glory everlasting. For a holy symbol he was awfully clever, too. Would stumble about like a drunken sailor and lure would-be predators to come close enough for him to reach out and crush 'em with his mighty claws. Aye, he's definitely smarter than the average crab.

Do Not Sell My Personal Information
Retrieved from "https://ffxiv.consolegameswiki.com/mediawiki/index.php?title=Deacon&oldid=274723"
Categories: