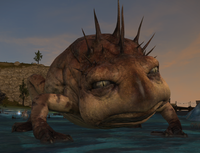 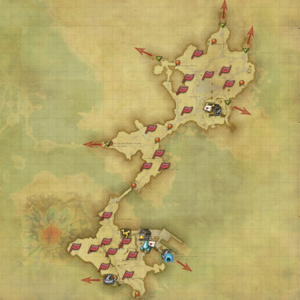 Assuming its random timer is up, Croakadile will spawn when a player travels over its chosen spawn point between 5PM-8PM Eorzea Time during a Full Moon.

Frogs of inconvenient size are a legion, but surprisingly few of them seek fodder commensurate with their size. The Croakadile is one such unwelcome surprise.
The first known victim during the present manifestation is reported to be a franklin who felt his ring slip off during a nightly walk with his lady.
He turned back down the path, and his lady saw him reach down just as the moon took cover behind a cloud. When the moonlight returned, he had vanished.