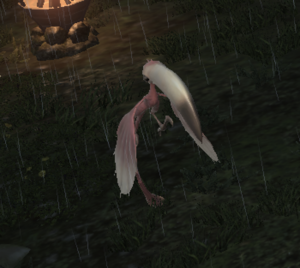 Myradrosh is a Rank B Elite Mark found in Upper La Noscea.

The nectar-eaters of Eorzea are partial to blooms of different hues. Red flowers such as Oschon roselles and raincatchers are the preferred feed of colibri.
Being one such bird, Myradrosh became so fixated on that hue that it now sups from the reddest flower of them all-the still-warm flesh of other birds, beasts, and men.

Do Not Sell My Personal Information
Retrieved from "https://ffxiv.consolegameswiki.com/mediawiki/index.php?title=Myradrosh&oldid=274676"
Categories: