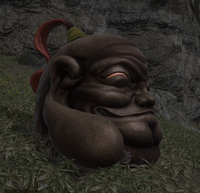 Deidar is a Rank B Elite Mark found in Yanxia. 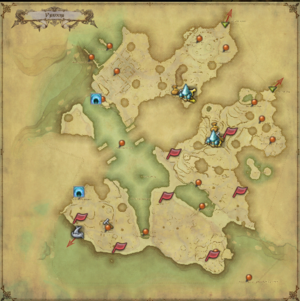 The legends of the Far East tell of a giant by the name of Deidar. Our tale, however, begins with a man.
Now, had this man simply dreamed of building a statue of the legendary colossus, all might have been well. But he was an onmyoji of dubious skill, and he succeeded in imbuing his clay sculpture with the spirit of a shikigami.
In Eorzea his creation might have been called a golem. I would call it a failure. Thanks to the onmyoji's clumsy rituals, only the head came to life... It rolled free of its giant shoulders, and now waddles around the land in search of a more suitable body.

Do Not Sell My Personal Information
Retrieved from "https://ffxiv.consolegameswiki.com/mediawiki/index.php?title=Deidar&oldid=274706"
Categories: