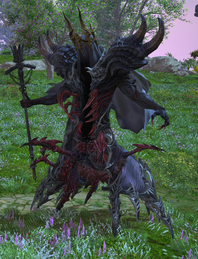 Ker is a Rank S Elite Mark found in Endwalker.

Each time a Rank S dies in Endwalker areas, it has a chance to spawn four Ker shroud throughout the zone. Once four of them are killed, Ker will spawn.

If they spawn, the game will announce: "The minions of an extraordinarily powerful mark are on the hunt for prey."

They will withdraw exactly 5 minutes after this message if not engaged, or if disengaged by dying.

When all of them are killed, Ker will spawn.

Ker has no respawn timer. It is randomly decided by the server upon each Endwalker Rank S death whether it will spawn minions or not. Because of this, if the spawning fails because a minion withdraws it has no effect on any timers. It could theoretically spawn minions after every single Rank S death in Endwalker in a row if the game decided to randomly do that.

When it spawns, the game will announce "You sense the presence of a powerful mark..."

Watch these stacks because once they run out, the interment casts will happen in the direction they say.

Myths serve myriad purposes, but one of the more prominent sorts is cautionary tales. Among such stories, those of Ker may be the most terrifying.
It is said that Ker appears on the battlefield to feast upon the souls of the dead, hunting down the living she lays eyes upon unto the ends of the earth. She brings naught but a swift demise to those who dream of glory.
If I was to postulate that Ker is not merely mythological—which I do—she must be some manner of ashkin. "Undead," in layman's terms. This would explain how millennia can pass without a sighting...
However, legend has it that her "shrouds" are ever in search of new prey for their mistress, so hope yet remains. Should you glimpse these spirits in reddened rags as you sheathe your own bloodied weapon, pray keep your wits about you...