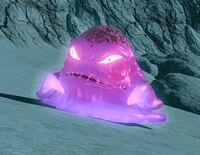 Mousse Princess is a Rank A Elite Mark found in Mare Lamentorum.

As one should hope you are aware, summoning a high-ranking voidsent to our plane requires a vast amount of aether be manipulated to tear a hole in the veil betwixt this world and the void.
On extremely rare occasion, however, a tear may naturally form, creating a planar fissure from which the likes of low-ranking voidsent, such as the imp, squirm their way into our world. Obviously, this phenomenon must also occur on the moon.
Now, without a satisfactory vessel to inhabit on the moon's surface, I am quite certain the voidsent would be forced to dwell in an amorphous lump of lunar soil. The only true question is what to name the resulting specimen...but I think “mousse princess” sounds rather sweet, don't you?