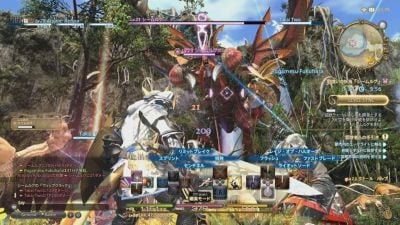 FATEs (Full Active Time Events) are dynamic scenarios, often battles, that appear around Eorzea. FATEs involve boss battles, escort missions and other events. Players can complete these events for experience, gil and Grand Company seals. Occasionally players will also receive items for successful completion of a FATE at gold medal. FATE credit is shared amongst all members of a party. Group up for better chances at maximum credit.

To locate a FATE, look for FATE indicators that randomly appear on your map. To join a FATE, simply enter the FATE radius (blue circle) on your mini map and attempt to complete the FATE objectives. There are no limits to the number of players that can participate in a FATE at a time. If the player's level is too high, they will be asked to level sync down. FATEs can be completed by finishing the on-screen objectives within the time limit. Players are rewarded with experience and gil when a FATE is completed.

Monster FATES require the players to defeat waves and waves of monsters. On your map, they show up as icons with two crossed swords. Players can increase their rating by tagging or first hitting monsters, doing damage to the monsters and healing and reviving other players. To obtain participation for a monster slain, players need to get on the aggro table (pops up on the left) for that monster when it is slain.

Boss FATEs require the players to defeat one large and powerful boss monster. On your map, they show up as icons with monster maw. Players can increase their rating by doing damage to the boss, tanking hits from the boss and healing other players.

These are not visible on the main map, and must be located on the minimap display.

Collect FATEs require the players to collect and turn in special items. On your map, they show up as bag icons along with a small bag that indicate the location of the FATE NPC. Players can increase their rating by turning in FATE items before the timer hits 0. You can also obtain items by defeating the FATE mobs that spawn continuously.

In these FATEs, players have to defend certain objects/NPCs from destruction/defeat for a specified amount of time. Waves of enemies will attempt to destroy/defeat these objects/NPCs and players must defeat these foes. If the objects/NPCs are destroyed/defeated, players fail the FATE. In the case of Defending NPCs, they can be healed by players and this can be critical to succeeding in the FATE. Objects cannot be healed, and therefore those FATEs benefit most from a tank to immediately grab aggro from the enemies.

In these FATEs, players need to escort an NPC or multiple NPCs from one place to another. The NPC will travel from point A to point B, players must defend them from incoming monsters. If the NPC is killed, players fail the FATE.

The Shared FATE system was introduced in Shadowbringers with patch 5.0 and carried forward in Endwalker. Instead of Company Seals, players receive

Bicolor Gemstones for participation in FATEs in these zones.

Players occasionally group up and farm FATEs for experience. Generally this is done while waiting on queues or while simultaneously working on various Relic Weapons. Experience per hour is quite poor from FATEs alone.
Various FATE spots emerge for different levels.

Large-scale "Hot Spots" diminish rapidly as you progress. After level 50, here are your target zones by FATE level.

FATEs that appear in Stormblood (and later) areas will, on occasion, offer a bonus to EXP awarded upon completion.

FATEs offering bonus EXP can be confirmed via the map or the Recommendations list. 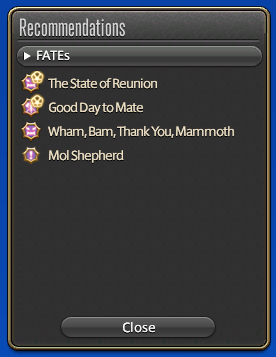 A special enemy called the Forlorn Maiden may appear over the course of any given FATE. Players will see the chat message "The smell of death has drawn a Forlorn maiden to the battlefield!" when one spawns, and "The Forlorn maiden dissipates..." when it is defeated.

In very rare instances a significantly larger, tougher variant called The Forlorn may appear instead. 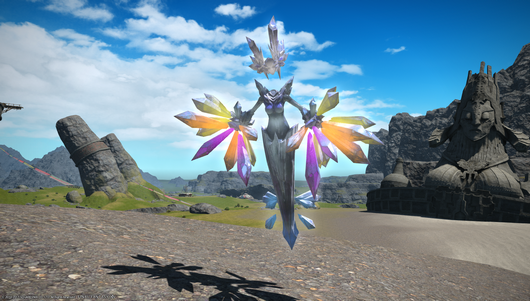 By defeating the Forlorn Maiden or The Forlorn, all players who participated in the FATE and received a rating will be granted the Twist of Fate status.

Players under the effect of the Twist of Fate status will receive 15% increased EXP rewards upon completing the FATE in which the Forlorn Maiden was defeated. The status then persists and grants a further 50% increased EXP for a subsequent FATE players participate or receive a rating in.

The effect has no expiry time limit. However, players will lose the buff if they leave the zone in any way.