See also: The Dalriada and The Bozjan Southern Front

The IVth Legion has retreated to the barren plateaus of Zadnor, their imperial flagship looming ominously on the horizon. What they hope to gain from their newfound base of operations remains to be seen, but the Resistance refuses to stand idle. As both sides are pushed to their limit, who will emerge the victor as the battle for Bozja reaches its bloody climax?

Zadnor is a level 71 adventuring foray introduced in patch 5.55 with Shadowbringers.

This is an instanced area that up to 72 players can explore simultaneously, and is the second major battlefield of two in the Save the Queen: Blades of Gunnhildr storyline. Like the Bozjan Southern Front, Zadnor is a instanced encounter wherein players assist the Bozjan Resistance in their continued effort to reclaim their homeland from the IVth Imperial Legion.

All duty-specific mechanics (e.g., forming parties, level sync) are identical to those of the Bozjan Southern Front. For more information, see that page.

Mettle is obtained in much greater quantities in this duty than in the Bozjan Southern Front or Delubrum Reginae, making this the ideal location to farm mettle. However, the other Save the Queen duties are sources of useful Lost Actions and other rewards that are not found in Zadnor.

Players who have reached the maximum Resistance rank can receive honors to permanently increase their strength when undertaking duties in Save the Queen areas.

After reaching Resistance rank 25 and completing the quest

The number of proofs in your possession can be confirmed at any time via the HUD. 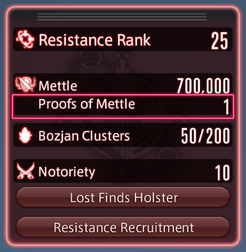 The more of these honors in your possession (up to the cap of 10 each), the greater their effect. The number and types of each Sun in possession will be displayed as permanent buffs that are not lost on death. These effects are only active in Save the Queen duties.

Obtaining 10 of each Sun will complete the Suns of Bozja achievement, which unlocks "The Emblazoned" title.

The Dalriada is a special engagement that takes place on a separate map and serves as the "finale" to Zadnor. Available after reaching Resistance Rank 25 and completing the prerequisite quests, it is a raid dungeon that allows up to a maximum of 48 players, and is accessed in the same way as Castrum Lacus Litore is in the Bozjan Southern Front. When it pops, click the Register button in the Resistance Recruitment list, and if you are selected, click Commence.

Bozjan Platinum Coins will only drop after completing The Dalriada for the first time.