At first glance, the faintly glowing crystal brought back from Eden's core appears to be little more than a pretty bauble. As you gaze deep within, however, you are bombarded with images of your encounters in the Empty─but your adversaries have been twisted into monstrosities far more ferocious than those in your memory. Though you know these to be naught more than illusions, you find yourself compelled to see them through...

Eden's Gate: Sepulture (Savage) is a level 80 raid introduced in patch 5.05 with Shadowbringers. The raid is also known as E4S.

NOTE: It is possible to fall off the edge of the arena and plummet to an early doom during the entire encounter. However, should any participant fall, they can be raised after a moderate delay. The arena is also segmented into 16 tiles that play a significant role in Titan's mechanics. 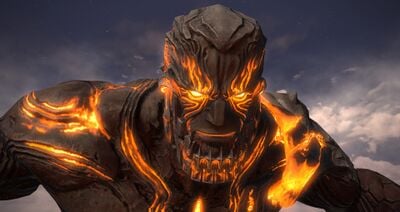 After a brief transition, Titan will now be enormous in size and permanently fixed to the north side of the arena with a massive hitbox (two tiles deep).

If you have survived the ordeal thus far, participants will witness Titan Maximum become untargetable and vomit out another Titan in his regular (smaller) form, indicating the final phase. From here on, participants are forced to contend with mechanics from both Titan's simultaneously.