The Second Coil of Bahamut - Turn 1

The Second Coil of Bahamut - Turn 1

Your foray into the caverns beneath Castrum Occidens has led you to an unexpected revelation: the incomplete form of Bahamut, harbinger of the Calamity, slumbers deep within earth. Though seemingly a prisoner, the elder primal is gradually being regenerated by the massive, Ragnarok-class internment hulks that surround the unmoving entity. Alisaie reasons that if Bahamut's full restoration is to be prevented, then all three coils sustaining and repairing the dreadful being must be deactivated. Filled with new determination, you assemble a group of courageous comrades and set your sights on the fragment of Dalamud found int he North Shroud.

Phases 1 and 2:
Bloody Caress is a frontal, conal AoE attack that applies a

Vulnerability Up debuff to the tank. Rest of the party should stand behind the boss to avoid the ability. Rafflesia will use the ability once every 15 to 30 seconds in the first two phases. Tank Swap should occur every 2 - 3 stacks of the debuff.

Floral Trap is an ability that marks a random player with a yellow sign then sucks all players near that player to Rafflesia, within melee range. Immediately after Floral Trap, the boss will cast

Devour. Players standing on the vine areas of Briary Growth will not be pulled to the boss. The marked player should remain behind the boss while rest of the party should move in front of it temporarily. Players in front should be unaffected by the pulling this way. Rafflesia will use the Floral Trap after second Thorn Whip.

Devour is an ability used immediately after Floral Trap. It absorbs all players within the boss' melee range. The boss gains a damage buff from the absorbed player and removes the Honey debuff from Viscid Emission. Rafflesia will use Spit immediately after.

Spit is an ability used after

Devour, it releases the players absorbed by

Devour and deals about 2000 damage to all players in party.

Blighted Bouquet is an ability used at 70% HP, when transitioned from phase 1 to 2. This ability will instantly kill any player moving, attacking or using any abilities when it finishes casting.

Viscid Emission is an ability used in phase 2. This ability places a Honey debuff on a single player. An Add named Dark Matter Hornet will attack the player with the debuff. The add should be killed quickly because it cannot be taunted away. The player with the debuff needs to be Devoured or adds will continuously spawn and attack the player in Phase 3 without a means to remove the debuff. If the person with the debuff dies, Rafflesia will use Viscid Emission on another player, each time Viscid Emission is cast, another Dark Matter Hornet will spawn. If the add is not killed after a certain amount of time, it will use Sharp Sting, instantly killing the target.

Phase 3:
Leafstorm is used at the start of phase 3. It deals about 2000 damage to all players in party.

Dark Matter Slugs are 3 adds that spawn immediately after Leafstorm. They should be controlled by your off-tank and killed by caster Limit Break. Players can also leave 1 of the slugs alive. Let it eat 3 Acidic Honey, allowing it to turn into a super slug then killing it.

Acid Rain is an ability used immediately after the spawn of the Dark Matter Slugs. Acid Rain is circular AoE spells that spawn underneath the feet of 3 players. Players should move out of these circular ground indicators. At the center of these indicators, 3 adds named Acidic Honey will spawn. These adds apply a stacking debuff named Acid Cloud to all players in group. Acid Cloud deals damage to all players, and the more debuffs the player has, the more damage she will take. Players can have up to 10 stacks, taking upward of 6,500 damage. One possible solution is ignoring the debuffs and DPS down the boss. Another, better solution is to allow one Dark Matter Slug to live. Then stack all the players and allow Acid Rain to spawn in the same location and allow Acidic Honeys to spawn at the same location. The slug will be able to consume all the Acidic Honeys and transform into a super slug. Players then need to kill the super slug but do not need to worry about Acid Rain.

Swarm deals about 1,000 damage to your main tank and places 4 debuffs on her.

Thorn Whip is an ability that tethers to different party members with visible lines. Players tethered together need to move away from each other to break the link or take about 300 to 500 damage per second. As the battle progress an increasing number of people will be tethered. At the start of the fight, about 2 players are tethered, but at the end, up to 6 will be affected.

Rotten Stench is used during Thorn Whip. It deals linear AoE damage to a player. The damage is split between all the players it hits. When players are breaking Thorn Whip, they should move up and down from each other instead of sideways so they can stay in the AoE and absorb the damage from Rotten Stench.

Phase 2: 70% to 40%
Phase 2 starts off with a Blighted Bouquet. During the cast, players need to stop moving, using abilities or attacking. All the players who are performing actions at the end of the cast are killed instantly. When the boss uses Viscid Emission, kill the add quickly. The individual with the Honey debuff needs to be Devoured by the boss before the phase is over.

Phase 3: 40% to 0%
When transitioning from Phase 2 to 3, Rafflesia uses Leafstorm. The ability deals about 2,000 damage to everyone in the party. The boss will no longer use some of its abilities such as Blighted Bouquet, Bloody Caress, Briary Growth, Floral Trap,

Devour and Spit. Tank swap will no longer be necessary. After Leafstorm, 3 Dark Matter Slugs will spawn. After the death of the slugs, Acid Rain will be used underneath 3 players. Players need to move out of the ground indicators. Acid Rain also spawns Acidic Honeys, which periodically use an ability called Acid Cloud. Acid Cloud deals damage to all players and applies a debuff that stacks up to 10. The more stacks of the debuff a player has, the more damage she'll take. At 10 stacks, players will take up to 6,500 damage.

Players should also watch out for 2 new abilities, Rotten Stench and Swarm. 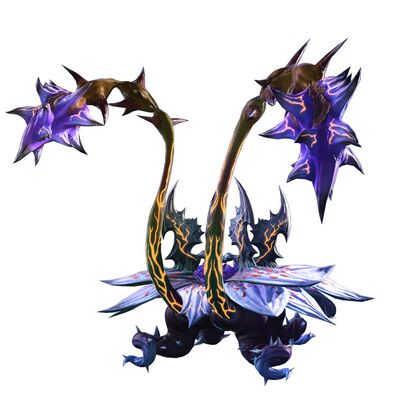