Ramza is itching to depart.

Back at the Prima Vista

Lina Mewrilah: Jenomis remains deep in slumber, but his breathing is steady and his fever has subsided. For now, all we can do is wait. I've sent word to Cid. I hope you don't mind...

Jenomis cen Lexentale: Alma, Ramza. Can you ever forgive me? 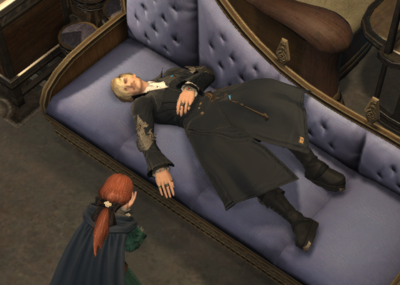 Jenomis resting on the Prima Vista after the events in Rabanastre.

Jenomis cen Lexentale: And you, Cid. It was never my intention to put you to such trouble... I am ever in your debt.

Cid: You would have done the same for me, Jenomis. Besides, it was [Player] here who went to all the trouble. If anyone deserves your thanks, it's [him/her].

Jenomis cen Lexentale: He is right. I have done naught to deserve your kindness, yet I am its beneficiary nonetheless.

Cid: ...So, if I understand correctly, you're saying auracite does not work to facilitate the possession of a living host by an eikon, as was assumed to be the case with Ysayle and the archbishop...

Cid: ...but rather absorbs the host's aether -- its very soul -- and somehow transforms it before returning it to the host's body.

Cid: If that is the case, our Sharlayan allies will need to be informed immediately.

Cid: But I suppose the real question here is... did you find what you came looking for?

Jenomis cen Lexentale: The legend would have us believe that Delita Heiral -- the commoner who would be king -- was the sole hero of the Zodiac Brave Story, but as I have discovered, there was another. Two others, in fact...

Jenomis cen Lexentale: ...Siblings whose roles faded from subsequent retellings of the story. A brother and sister by the names of Ramza and Alma.

Lina Mewrilah: To prepare for this assignment, I pored over every published work on Ivalician legend I could lay my hands on, and nowhere did I find any mention of these siblings.

Jenomis cen Lexentale: But I did. I uncovered irrefutable evidence that Delita had a close companion named Ramza who aided him in his rise to power. This in turn led me to Alma. And that I might never lose sight of the truth, I named my own children after these lost players.

Jenomis cen Lexentale: I'm sorry I never told you any of this, Cid, but you must believe me. Ivalice has never been a mere pastime of mine. It is and forever will be my calling. My purpose.

Jenomis cen Lexentale: Countless generations past, it was my ancestor who penned the Durai Papers -- an account of Ivalice and the War of the Lions that details what truly occurred during that turbulent era.

Ramza bas Lexentale: You are tired, Father. Rest. I will continue.

Ramza bas Lexentale: Long ago, an orphan by the name of Orran Durai crossed paths with both Ramza and Delita. After Delita's rise to power, Orran found himself in the service of the pauper-become-king.

Ramza bas Lexentale: Following the War of the Lions, Orran believed the people of Ivalice had a right to know the truth of Ramza's involvement, and set about documenting his deeds. When the church learned of his intent, however, they branded him a heretic, and had him burned at the stake.

Ramza bas Lexentale: The Durai Papers were never published, and any existing copies were gathered and sealed away in church vaults -- the truth about Ivalice along with them.

Lina Mewrilah: What was so damning that it would drive the church to do such a thing? 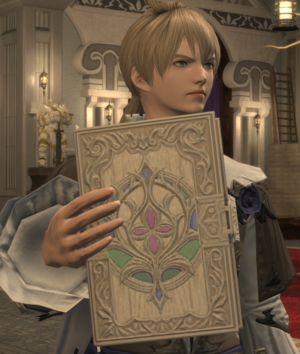 Ramza holding the only surviving transcript of the Durai Papers.

Ramza bas Lexentale: The answer to that question can be found in this book -- the only surviving transcript of my ancestor's chronicle, copied from an early draft and passed down for untold generations.

Ramza bas Lexentale: With this, my father and I plan to reveal the truth and restore honor to my family name.

Cid: Forbidden chronicles? A secret family legacy? Not that I doubt you, Jenomis, but how do you expect to convince people of all of this when well-nigh every soul in the realm believes Ivalice to be nothing but a bedtime story?

Jenomis cen Lexentale: By proving that it is anything but.

Jenomis cen Lexentale: And when people see that Ivalice was real, the rest will fall into place.

Ramza bas Lexentale: Were it as simple as bringing forth the chronicle and submitting it for review, we would of course have done so long ago. But, alas, it is not. The Durai Papers, you see, are written in High Ivalician -- an ancient tongue long extinct.

Ramza bas Lexentale: My father, his father, and his father before him labored tirelessly to decipher this tome, but for want of other sources made only fitful progress. A word here, a phrase there. It wasn't until a recent expedition to Rabanastre turned up several well-preserved artifacts that we were able to translate a small portion of the papers.

Lina Mewrilah: Then the diary stolen by the bangaa bounty hunters--

Jenomis cen Lexentale: I'm afraid so. Everything we had learned of the language was contained in those pages.

Lina Mewrilah: Then we're back to where we started.

Ramza bas Lexentale: Not necessarily. We still have the transcript, as well as some few translated passages. And, of course, my father's impeccable memory.

Jenomis cen Lexentale: I have come too far to allow so simple a setback to deter me from my purpose. I will show the world the truth if it is the last thing I do!

Alma bas Lexentale: (It is as Master Garlond said... He is a man obsessed, and I fear Ivalice's grip on him will only grow tighter...)

Alma bas Lexentale: (Father was fortunate to escape Rabanastre with his life, and already he speaks of continuing his quest? Promise me you'll keep him safe. Please...)

Lina Mewrilah: After what I've seen here, I'm all but convinced that Ivalice exists... at least in some form.

Lina Mewrilah: The problem will be gathering sufficient evidence to convince the thousands of scholars and historians who have based their careers on the presumption that it doesn't.

Lina Mewrilah: Not that I've ever been one to shy from a challenge, especially when it means the story of the century!

Lina Mewrilah: If you're in, [Player], then I'm in. If you're not in... well, I'm still in. Either way, you'll be hearing from me again soon. That much I promise you!

Lina Mewrilah: Those ruins we saw in Rabanastre were all the convincing this skeptic needed. The kingdom of Ivalice is real, and curse the fool who dares say otherwise.

Lina Mewrilah: But this is no longer simply about proving Ivalice's existence. It's about uncovering a truth that was buried for what can only have been the most questionable reasons.

Lina Mewrilah: And if solving a millennia-old mystery isn't the pinnacle of investigative reporting, I don't know what is. We're in this together, whether you or the Lexentales -- pardon me, the Durais -- like it or not!

Alma bas Lexentale: After hearing the account of your descent into Dalmasca, I couldn't help but wonder what other horrors lurk in the Estersands.

Alma bas Lexentale: My brother made me swear an oath I'd not breathe a word of this, but he and Father believe that deep within the ruins of Rabanastre dwell creatures bound by Divine Magicks older than the Royal City itself.

Alma bas Lexentale: I cannot help but wonder... Were they imprisoned there to protect us against them, or to protect whatever lies below against us?

Alma bas Lexentale: Nothing I can say will free Ramza and my father from the curse that is our family's legacy, but I fear the worst should they continue to pursue the legend...

Ramza bas Lexentale: We are currently attempting to retranslate passages of the Durai Papers from memory -- focusing on the sections that mention the Duma -- but the going is slow without my father's journal.

Ramza bas Lexentale: I will see those filthy bangaa's heads on pikes before this is over... But first, the translation. Someone will send word once we have something of substance. Good day.