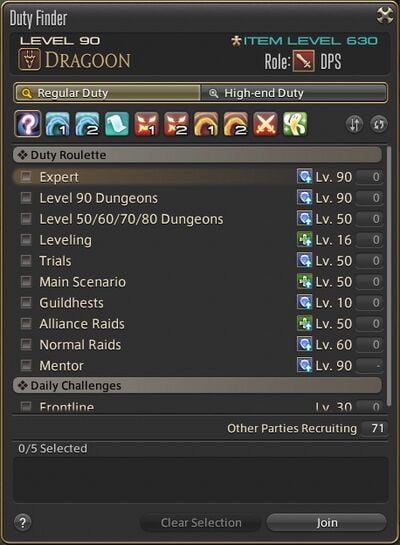 Duty Finder is a tool players can use to automatically find groups for dungeons, guildhests and other group content. Player needs to unlock the dungeon or guildhest first before using the tool. Duty Finder will match players from different servers. A light party consist of 1 tank, 1 healer and 2 damage dealers (DPS).

In patch 2.1, Duty Roulette was introduced to allow randomization of duty selection with daily bonuses for certain activities.

Duty Finder unlocks at the same time as your first matched duty. This could be either a Guildhest or the MSQ

Duty Finder settings were introduced in patch 3.0. Players can access settings from the gear wheel icon on the top left corner of the Duty Finder menu (above the "Duty Finder" menu name).

Unrestricted Party (formerly undersized party, referred to as unsynced by the community) allows players to participate in Duties with below minimum party member requirements. For example, running Sastasha Seagrot with 2 players. In this setting, level sync, item level sync and role requirements are ignored. Only certain duties allow undersized parties.

Minimum IL or item level reduces the item levels of the entire party to that of the minimum item level requirement of the duty. It is intended for players wish to be challenged by the duties to a similar degree as when the duties were first introduced. Players can select this setting in conjunction with Undersized Party setting.

It is worth noting that this is something of an misconception, as older duties from past expansions especially would have had drastically different abilities on the classes and jobs. This leads to an easier experience overall due to potency creep and job overhauls. In extreme instances, gear sync even at min ilvl would not reflect the stats of players in appropriate period gear. It can also be the case that MINE is harder than intended particularly for 2.0 jobs that have been heavily gutted at lower levels. All this was made worse by the Endwalker patch 6.0 non-linear stat-squish. So while "Minimum ilvl, no Echo" or MINE runs are done by sections the community, it is not accurate to say that it offers "the original level of challenge."

Greed Only: All party members must select Greed.

Lootmaster: Party Leader determines loot distribution. For each drop, party leader can manually distribute the loot to an individual party member or make the entire party choose Greed only.

Explorer Mode was released in patch 5.4 in Shadowbringers. It allows players to freely explore previously completed dungeons. Using Explorer Mode, players can take their time to enjoy the scenery of their favorite dungeons with no enemies or obstacles to ruin their fun.

Triple Triad and Lord of Verminion

In patch 3.4, players can queue to play Triple Triad in The Battlehall through Duty Finder. Players can also queue in Duty Finder to play Lord of Verminion. 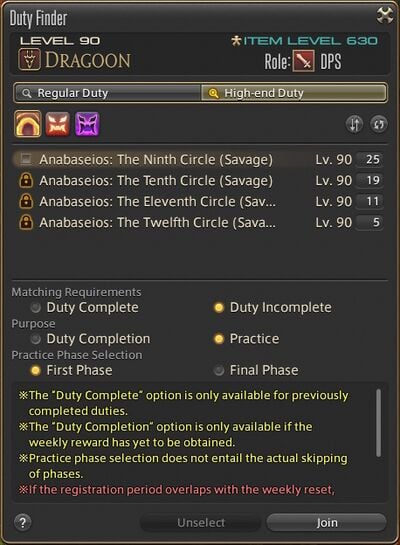 Raid Finder allows players to register for instanced raids without having to form a party. By selecting a desired raid and matching requirements, players will be matched automatically with other players spanning multiple Worlds within the same data center. The Raid Finder will be unlocked when speaking with the NPC who would normally unlock the entrance to the specified instanced raid. It can be accessed via the Duty tab of the Main Menu.

Players need only to have access to either the latest Extreme Trail, Have Unreal Trials unlocked or Have the latest savage tier unlocked. Please keep in mind, however, that the Raid Finder will become inaccessible when the next series of Savage raids or Extreme trials is introduced. At that time, players must unlock the next Savage or Extreme raid to gain access to the Raid Finder.

The following raids and trials are available through High-end Duty via Duty Finder:

This option is available only when selecting Practice. Players can then choose First Phase or Final Phase.

When queuing solo or with less than a full party, the Raid finder will match together 2 tanks, 2 healers, 1 ranged physical DPS, 1 ranged magical DPS, 1 melee DPS, and 1 other DPS.The fourth, unspecified DPS class or job to be matched will depend on the settings selected when registering for a raid.

When selecting Duty Completion, the unspecified DPS player cannot be the same class or job as other players to be matched together in a party.

When selecting Practice, the unspecified DPS player can be the same class or job as other players to be matched together in a party.

Please note that the above composition requirements are not imposed upon preformed parties.

Upon registering for and completing a given Savage raid, your weekly progress will be updated to that point, preventing you from obtaining rewards from previous raids.

Reward eligibility is reset every Tuesday at 8:00 (GMT).

Players can now be matched automatically with other players to challenge the hardest encounters Eorzea has to offer. Including options to match with other experienced players or practice groups, finding comrades-in-arms has never been easier.