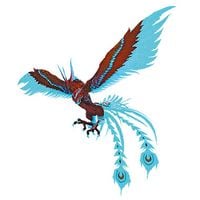 "'Tis man's overweening belief in his own primacy that blinds him to the commonness of his condition...and the truth of his own tyranny."

Phoenix is a boss found in The Final Coil of Bahamut - Turn 3.

Phoenix is also a server in the European Light Data Center.

There are many who claim to have witnessed the legendary Phoenix appearing in the sky following the Battle of Carteneau. Accounts of that time are fragmentary and inconsistent, owing to the forgetful haze affecting survivors of the Calamity, but the tale of the mythical bird of rebirth coming to Eorzea's salvation is a persistent one nonetheless.While some might dismiss such memories as hallucinations or wishful thinking, others have pieced them together to form a credible theory: "Archon Louisoix's attempt to summon the Twelve and halt the fall of Dalamud was interrupted in spectacular fashion when the elder primal Bahamut burst forth from the red moon's core. Drawing upon the vast quantities of aether gathered to summon the Twelve, it was the collective subconscious of Eorzea's people and the prayers for our dying star's survival that likely called the fiery Phoenix into being. While there is no solid evidence to support this idea, such an occurrence would be entirely in keeping with the metaphysical logic of primal summoning.

When the satellite Dalamud cracked open and Bahamut emerged, Louisoix channeled the prayers of the people for their salvation to the Twelve to transform himself into Phoenix. Using the power of the eternal bird, he struck Bahamut and blew his physical body apart, rendering him almost completely dead. The strain of using his body as a host for a primal proved too great for Louisoix however, and his body was also destroyed and was being reduced to Aether. However, he underestimated the tenacity of Bahamut, and just before he perished entirely, Bahamut was able to reach out to him and enthrall him. Due to him becoming a Primal and still having residual energy left from Phoenix, Bahamut was able to grip ahold of his spirit and take control of him. Thus, when Bahamut was pulled into the earth and the Allagan technology began restoring Bahamut, they also restored Louisoix. And there the Primal sat and waited, serving as a thrall of the elder wyrm.

Before he faded away, Louisoix entrusted the power of the Phoenix to his grandchildren and opened the path to the Final Coil of Bahamut so they may finish what they had began with the Warrior of Light.

Later, with much training, the Warrior of Light gains the ability to enter into the Firebird Trance, calling forth the demi-primal version of Phoenix to do their bidding.