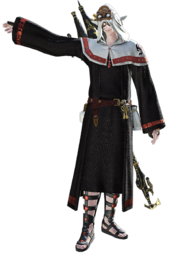 "The survivors gather, and ignite a fiery dawn to burn away the glowering shroud. Ah, but destiny, thou art beautiful..."

Urianger Augurelt is an Elezen. 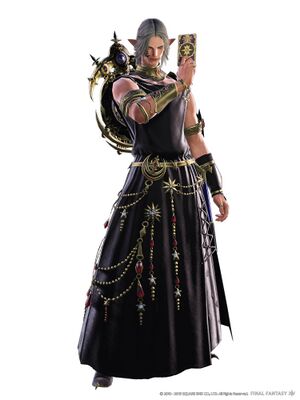 Urianger is an Archon of twenty-nine winters who presides over the Waking Sands. He has loved tomes since he was a child, and has always been particularly fascinated by prophecies. He sought such verses from all corners of the world, and read as many as he was able. His efforts left him with a poetic style of speech, ofttimes rendering the Elezen isolated from his fellow youths. With Moenbryda's aid, Urianger managed to enter the Studium, and later became a student of Louisoix Leveilleur—the leading Sharlayan authority on prophecy. Indeed, it is thought that Urianger elected to join the Circle of Knowing to learn the truuth of Mezaya Thousand Eyes's Divine Chronicles, a work that hinted at the coming of the Seventh Umbral Calamity.

Amber Carbuncle: By applying knowledge he had obtained at the Studium, Urianger altered the geometry for creating Topaz Carbuncles, allowing instead for the use of amber in the summoning of an arcane familiar. So complex is the process of invocation, however, that only he has ever been capable of reproducing the spell.