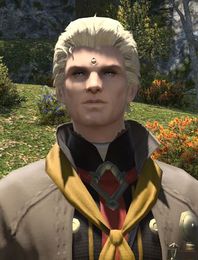 "And so long as my ambition burns, I shall strive to seize it."

Born in rural Garlemald, Nero ever dreamed of leaving the squalor of his poor village. With much work, he secured an entrance into the exclusive Magitek Academy, where he displayed a great talent for reverse engineering ancient technologies. However, his classmate Cid Garlond proved a foil to his ambitions. Try though he might, Nero ever came in second, and had to watch Cid graduate at the top of their class.Though invited to remain as a researcher at the Academy, Nero declined, and joined the imperial army. The choice appears to have been motivated by the access to the ruins of long-dead civilizations afforded to soldiers on the front lines. He has drawn upon his particular gifts time and again, constructing for himself a mighty gunhammer known as Mjolnir. Yet, perhaps the greatest accomplishment in his thirty-four years was the part he played in reviving the Ultima Weapon, a feat for which he gained no small renown.In recognition of his capabilities, he was made Gaius van Baelsar's second-in-command. Even so, he continues to oversee the development of magitek weaponry, which ever remains his foremost passion.

Nero tol Scaeva is a Garlean.

Nero tol Scaeva is a boss found in The Praetorium.