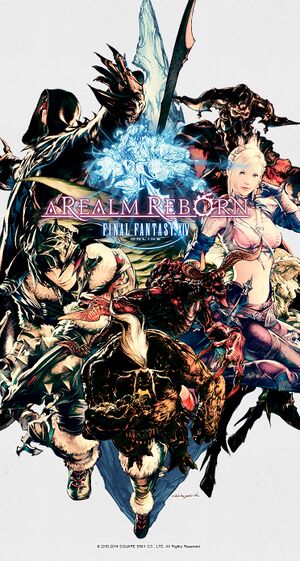 A Realm Reborn is a complete reboot of Final Fantasy XIV, created to replace the failed original 1.x version of the game.

Five years after the Seventh Umbral Calamity, the Warrior of Light experiences a vision where he is floating in the aether, and hears a voice calling out: "Hear... feel... think..." as a masked, dark robed figure appears before him. The Warrior conjures up a weapon of light, based on his starting class, and strikes the dark figure down.

The Warrior of Light wakes up on a carriage in the Black Shroud traveling to Gridania, accompanied by Alphinaud, Alisaie, and Bremondt, a traveling merchant. The Warrior of Light encounters some moogles, who ask him if he's seen anything suspicious. Later, the carriage is caught up in a skirmish between Gridanian forces and Ixal beastmen, but manages to escape unscathed. The carriage then continues on and reaches Gridania, where the Warrior of Light registers with the Adventurer's Guild in Carline Canopy, performs odd jobs for the people of Gridania, and learns the ways of his selected class.

The Warrior of Light wakes up on a carriage in Thanalan traveling to Ul'dah, accompanied by Alphinaud, Alisaie, and Brendt, a traveling merchant. The carriage is stopped for inspection by corrupt Brass Blades, who "find" contraband herbs, but are ambushed by Amalj'aa beastmen. The carriage escapes and continues on to reach Ul'dah, where the Warrior of Light registers with the Adventurer's Guild in the Quicksand, performs odd jobs for the people of Ul'dah, and learns the ways of his selected class.

The hero is hired by Summerford Farms to investigate alleged kidnappings, and pursues a lead to Seasong Grotto. There he encounters a Miqo'te woman wearing a strange device, but they are ambushed by an enraged goobue. Afterward the hero discovers a blue crystal, and upon picking it up, collapses and witnesses another aethereal vision with a star shower, a giant towering crystal and the same voice "Hear... feel... think...". The voice calls out to the crystal-bearer identifies herself as Hydaelyn, issues a prophecy of light fading and darkness taking its place, presaging an end to life, and beseeches the hero to prevent this fate, and tasks him with gathering the Crystals of Light. The hero wakes up, as the Miqo'te woman has discovered a seafarer's knife in the goobue's back, and is convinced the kidnappings are the work of pirates. The hero returns to Summerford farms to present his findings, where the taskmaster identifies the Miqo'te woman as Y'shtola, and assures the hero that she is unconnected to the kidnappings.

The hero performs odd jobs around the farm, and has to deal with a particular scoundrel named Sevrin who has been causing trouble. The hero is tasked with hunting Sevrin down, and finds him being beaten by two men whom he betrayed. The hero moves to confront them, but is interrupted by a masked, black-robed man who summons a golem to attack. The hero defeats the golem, and witnesses another vision. After returning to the farm, Sevrin explains that he was a member of the Serpent Reavers - servents of the Sahagin - and deserted them. He had planned to hand over his crewmates to save himself, and couldn't go through with it. He headed off to confess and turn himself in to the Yellowjackets - Limsa Lominsa's law enforcement. The hero returns to the Drowning Wench in Limsa Lominsa and asks Baderon the proprietor to put in a good word for Sevrin.

The hero performs miscellaneous tasks, and is eventually tasked with guarding the under-construction Victory - Limsa Lominsa's first ship built since the Calamity - from sabotage. Not long after, a band of pirates attacks and attempts to destroy the ship. The hero fights them off and strikes down their leader, who turns out to be the foreman's estranged father. On his body, a missive in an unknown language is discovered, and the hero takes it back to the Drowning Wench to have it interpreted. It is found to be written in the Sahagin language, and it mentions a diversionary attack on Swiftperch, but Baderon has the intuition to realize that the attack on the Victory wasn't the primary objective - Swiftperch is the true target!

The hero delivers the message to Commodore Reyner who considers how to respond, when s Yellowjacket bursts in and reports that the Sahagin are attacking South Tidegate. Lacking the resources to defend both location, Commodore Reyner dispatches the troops to South Tidegate while sending the hero to protect Swiftperch. The hero rushes to Swiftperch with all haste, and sure enough a band of Serpent Reavers attacks. The defenders are able to defeat the attackers, but their leader summons a voidsent, whom the defenders also defeat. As the defenders cheer their victory, the same masked, black-robed mage who summoned the golem confronts the hero and summons a more powerful voidsent, deeming the hero too dangerous to be allowed to live. The hero is joined by Y'shtola, and together they prevail over the masked mage and his voidsent. As the masked man expires, Y'shtola says the hero was blessed with a special gift, and identifies the masked mage as an Ascian, a Bringer of Chaos. It is they who have been manipulating the beast tribes. Thus the case of the kidnappings is brought to a close. In the words of Ryssfloh, "Those Reavers were the ones spiriting folk away in the dead of night, and this bastard here [the Ascian] was pulling all the strings." The hero reports back to Commodore Reyner, but not before noticing a dark crystal, which shatters before his eyes.

Back in Limsa Lominsa, the hero is welcomed by Admiral Merlwyb Bloefhiswyn, who recognizes his deeds and invites him to a celebratory banquet - a great honor. During the banquet Admiral Merlwyb gives her summation of recent events: The tattooed pirates call themselves Serpent Reavers, and have pledges themselves to the Sahagins' god Leviathan, and sought to kidnap civilians to grow their numbers. At that moment, the hero's crystal glows, and he shows it to Y'shtola, who identifies it as one of the Crystals of Light. The hero recalls his vision of the towering crystal after defeating the goobue, and Y'shtola and Admiral Merlwyb come to the conclusion that the hero is vessel of a higher power, and identify the towering crystal as the Mothercrystal. Admiral Merlwyb then tells the story of the Warriors of Light, heroes not of this land, who fought to protect it from the corruption of the primals, and from the Garlean Empire. They fought and disappeared at the Battle of Carteneau. They were remembered as great heroes, but nobody can remember their names or faces, which is why they are simply remembered as the Warriors of Light. Merlwyb believes the hero was chosen by Hydaelyn for a special reason, and admonishes him to keep his crystal safe.

At that moment, the hero collapses and witness a vision of the final moments of the Battle of Carteneau. The hero comes to, waking up in the Drowning Wench, and is summoned to Admiral Merlwyb's office. Merlwyb names the hero her envoy, grants him authorization to travel by airship, and assigns him the task of delivering missives to the leaders of Ul'dah and Gridania, to hold a memorial for the five-year anniversary of the Battle of Carteneau and the Seventh Umbral Calamity. They agree, as the Garlean Empire is a grave threat to Eorzea. The XIVth Legion, led by Gaius van Baelsar, is deeply entranched in Eorzea, and seeks to resume its campaign of conquest. The hero returns to the Drowning Wench to receive his next assignment...

The Binding Coil of Bahamut (Spoilers)