"I happen to be thoroughly enjoying the company of these ravishing young ladies and, gods willing, will still be doing so come sunrise."

Thancred Waters is a Hyur found in The Pillars. 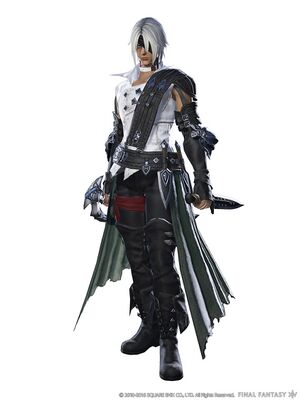 A member of the Scions, Thancred grew up in the backstreets of Limsa Lominsa, and spent his adolescence snatching purses with a band of petty thieves. One day, he targeted an Elezen man who had come to the maritime city-state to study aether. Unbeknownst to Thancred, that man was Louisoix Leveilleur and just as the boy drew near, the Archon sent him flying to the cobbles. Caught red-handed, Thancred was certain he would be tossed onto one of the city-state's prison hulks. Instead, Louisoix offered him an alternative: use his gods-given agility to aid his fellow man. Thus, the Midlander boy returned with the Archon to Sharlayan, and there began to study survival and intelligence gathering techniques. He became an expert in both, then an Archon, and then a member of the Circle of Knowing.
At thirty-two years of age, Thancred fancies himself silver-tongued when it comes to the fairer sex. Many women, however, would beg to differ. His boon companion is a nutkin, who has saved the Archon from several rather embarrassing situations.

Unnamed Blades: Obtained through trade in Loth ast Vath, Thancred carries one heavy blade—most likely a salvaged artifact of ancient Allag—and a slim trappers' dagger. Despite being products of necessity rather than choice, the Archon has grown quite fond of the odd pair.