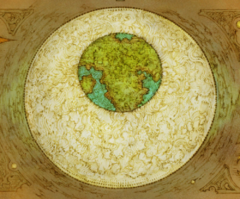 The First reflection, more specifically its region of Norvrandt, is the setting of the Final Fantasy XIV: Shadowbringers expansion, and the world from which the Warriors of Darkness hail.

The First is a world in Final Fantasy XIV.

It is the setting of the Shadowbringers expansion. It is one of thirteen alternate versions, or Shards, of the planet Hydaelyn, the "Source". Norvrandt is the only habitable region, with the bulk of the planet consumed by the Empty.