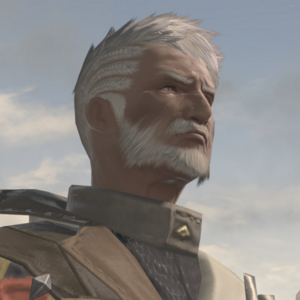 The leader of the Ala Mhigan resistance, Conrad Kemp

The line of victory and defeat is drawn by the swift and trod by the dead.

The Ala Mhigan resistance was a movement founded to fight against the Garlean Empire and free themselves of Imperial occupation. These revolutionaries were the same who rose up against King Theodoric in the final days of the monarchy.

While the various resistance cells are splintered and spread across the country, they all report to and relay information to one another and all fall under the leadership of Conrad Kemp.

In the Sixth Astral Era, after constant war and strife, the warring tribes of Gyr Abania joined together to form the city-state of Ala Mhigo. After a time of peace and stability in Eorzea, The military of Ala Mhigo launched covert military strikes in the hopes of preserving their way of life and expand their influence. They attempted to invade the Black Shroud in a war called the Autumn War, however the other nations banded together to drive them out. This caused distrust and drove a wedge between Ala Mhigo and her neighboring states.

All of this warfare with other nations steadily created more and more unrest among the populace. This resulted in the formation of the resistance force that would later be the basis of the Ala Mhigan Resistance. The people rose up against the tyrannical ruler King Theodoric and slayed him, leading to the freedom of Ala Mhigo. However, this caused mass instability, which the Garlean Empire took advantage of and subjugated the people once again.

For almost thirty years, the people of Ala Mhigo have fought to little effect against the Empire, but due to their overwhelming strength and the crippled state of the Ala Mhigan economy when the Empire took over, not to mention the suppression of Ala Mhigan people as third-class citizens, the resistance was never able to get a foothold.

After the Ul'dahn Revolution and the Scions were separated, Yda Hext and Papalymo Totolymo joined up with the Resistance and learned of a cell called the Masks and their leader the Griffin. The Griffin and the Masks are rounding up youth and freedom fighters, saying they have a method to finally fight back against the Garleans, and quickly build a large militia.

The Scions believe that they may be considering summoning a Primal, made more apparent by the theft of caravans of crystals. Upon investigation, they end up coming into contact with a messenger of the Griffin, who admits to stealing the crystals, not for themselves, but for the Amalj'aa, in the hopes they would summon Ifrit for their cause. Hearing this, the Warrior of Light and the Scions head to the Bowl of Embers, where they come into contact with the Warriors of Darkness. This is a ploy by the Griffin, who is working with the Ascian Elidibus. The Griffin is gifted the Eyes of Nidhogg, told that as a being of relentless despair and vengeance, he was worthy to inherit them.

As the Scions and the Warrior of Light regrouped, they are interrupted by a wounded M'naago, telling them that the Masks have launched an attack on Baelsar's Wall. The scions alert the other city state leaders, and they all move in to reinforce the Gridanian border.

Upon arriving at the Wall, they learn that the soldiers of the Griffin are wearing Grand Company uniforms, clearly intent on dragging the Alliance into his conflict. The Warrior of Light and the Scions fight to the top of the wall, where they confront and defeat the Griffin. Revealing his identity to be none other than Ilberd Feare, he reveals his grand plan: Use his rage and the lives of the Masks to summon a Primal. And to power his summoning was the Eyes of Nidhogg. He enacts his summoning, throwing himself from the tower as he does so. Papalymo manages to contain the Primal, but at great personal cost.

The Scions turn to Allagan technology to combat the new Primal threat: a machine called Omega. With the help of Nero tol Scaeva, they launch the automaton just in time. It attacks the Primal Shinryu, and the two disappear in a burst of light.

After the destruction caused at Baelsar's Wall, the Warrior of Light and the Scions of the Seventh Dawn end up roped into the conflict against the Garlean Empire. They meet with the leader of the resistance, Conrad Kemp, who sends them on various missions to prove their loyalty to the cause. They attack various Garlean bases and take down a facility testing new Magitek, but are soon met with retaliation from the Garlean crown-prince Zenos yae Galvus and an army of Imperial soldiers. Zenos moves through the camp at Rhalgr's Reach, destroying a good portion of the resistance. He is even able to cow the Warrior of Light and bring the Scions to heel. Disappointed with how easy his foe was to defeat, Zenos leaves the rest for dead.

This deals a crushing blow to the morale of the Resistance, with their leader even suggesting they surrender to the Empire. Refusing to believe this is the only course of action, the Scions head to Doma in hopes to divide the Garleans forces to give a fighting chance back to the Ala Mhigans.

After a long conflict, the Scions manage to free Doma from the grip of the Empire. The tale of this conquest spreads to all corners of the star, igniting many sparks of revolution and further distracting the Empire. The Ala Mhigan Resistance sees this as their time to strike, and begin war campaigns taking back land from the Garleans.

The Resistance manages to take back Specula Imperatoris, an important stronghold to the Empire, but their celebration is cut short, as Fordola of the Skulls Orders a cannon to fire on the facility, sending it careening down the mountain and into the sea. This kills not only Resistance members, but also Imperial fighters as well. Lyse and the Scions find Conrad under some rubble, on death's door. Knowing this is the end for him, he makes Lyse the new leader of the Resistance, then passes away.

With the flame of revenge ignited further in the Resistance, they drive the Imperials back further into Ala Mhigo, where Fordola is captured and Zenos awaits a third match with the Warrior of Light. While the Resistance retakes Ala Mhigo castle, The Warrior of Light engages Zenos atop the castle in the Royal Menagerie, where the Imperial prince reveals he has captured Shinryu, and melds his Aether with the dragons. Through a bloody battle, the Warrior of Light brings the Primal and Zenos low. He then takes his own life, effectively bringing the Liberation War to an end.

With Ala Mhigo finally free, the Resistance goes on to form the military of the city state, and rejoins Eorzea as part of the Alliance.

The Empire does not take this loss lightly however, and musters forces to take back Ala Mhigo. Through dealing with uprisings in other cities, they end up destroying their own fuel supply, meaning that they can only attack Ala Mhigo from one direction: through The Burn. This however proves unfruitful, as the Scions manage to erect a barrier preventing any warships from passing through.

In a last desperate attempt to reclaim the land and curtail resistances cropping up all over Garlean-occupied lands, The Empire goes to war. The Empire and the Alliance, Ala Mhigo included, wage their war in the Ghimlyt Dark. They are pushed back however and seem to be in a stalemate currently, as the Empire is also dealing with fallout in their own country of Garlemald. 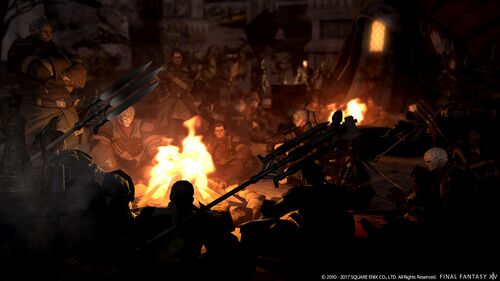