"For Coin and Country."
The bustling commercial hub of Ul'dah sits amid the desolate desert landscape of southern Aldenard. The city is organized strategically around the dome-shaped citadel at its center. Its towering fortifications and protective outer walls are visible for malms in all directions, and serve as a stark deterrent to would-be besiegers.

Ul'dah is a city in Thanalan.

“The bustling commercial hub of Ul'dah sits amid the desolate desert landscape of southern Aldenard. The city is organized strategically around the dome-shaped citadel at its center. Its towering fortifications and protective outer walls are visible for malms in all directions, and serve as a stark deterrent to would-be besiegers.

Visitors from every corner of Eorzea come to Ul'dah to partake of the city's famed recreation, most notably the fighting arenas and gambling halls. Ul'dahn culture is known for its affluence, and the wealth of the nation comes in large part from its abundant mineral resources and prestigious clothcrafting industry.

Historically, it is the sultan who claims sovereignty over Ul'dah, but true power is wielded by the Syndicate, an elite group of six of the most influential and richest members of society. Nald'thal is the patron deity of the city, and two great halls devoted to his two aspects can be found in the eastern and western sections of the city.”
—Game Description

Ul'dah is one of the starting cities in Eorzea. As a bustling commercial hub located in the desert of Thanalan, Ul'dah is a city state ruled by the Syndicate, a group of six of the most influential and wealthiest members of society. The economy of Ul'dah is based on clothcrafting and mining.

Ul'dah has the following Guilds: 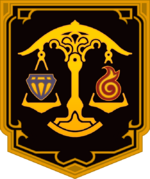 Ul'dah's flag bears upon a field of black a set of golden scales, which weigh the jewel of prosperity on the left and the flame of might on the right. This emblem itself originates in Belah'dia, where the scale weighed power and wisdom. Thus, the twin heirs to that ancient civilization took one sigil apiece: Ul'dah the flame, and Sil'dih the grapes of knowledge.

For Coin and Country

Members of the Ul Dynasty claim their sovereignty by right of birth. Their will is carried out by the Divan, a group of eight viziers who oversee matters of law, finance, engineering, the interior, commerce, war, religious affairs, and palace affairs. However the influence of the sultans has been waning for some time, and at the present true power is wielded by the Syndicate, a council sat by six of Ul'dah's most elite and influential. 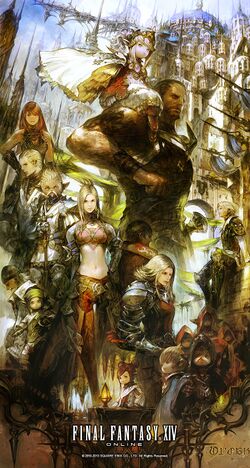 Sultana Nanamo Ul Namo, seventeenth in the line of Ul

As a sultanate, all offices of government serve to manifest the will and policy of Ul'dahs ruler.

Note: the race of refugees are not reflected in these numbers.

Nald'thal, the overseer of the underworld and god of commerce, is the guardian diety of Ul'dah. While many believe that He is possessed of a dual nature, Ul'dahns see Him as twins, and worship Nald and Thal separately. Since times of eld, the Order of Nald'thal has devoted itself to this task, and encourages the devout to donate their coin–for virtue in this life, and happiness in Thal's realm.

With a gateway to the five seas and roads to all corners of the realm, Ul'dah has long flourished as a center of commerce. Today, countless companies and consortia – both large and small – operate within the city-state.

Beneath the lands of Thanalan run countless veins of quality ore, and, as a result, bustling jewelry trade has evolved.

In addition to crafting essential fabrics for everyday use, a large and prestigious apparel industry has grown under the auspices of an increasing number of wealthy people. As represented by Sunsilk Tapestries, a number of notable brands have become popular even outside of Ul'dah's borders.

Thanks to the tireless study of ailments and Frondale's Phrontistery, Ul'dah has established itself as a reputable producer of alchemical and traditional cures.

The city-state offers something for seekers of pleasure, from gladiatorial displays in the Coliseum, gambling at the Platinum Mirage, and games of fortune ad the Manderville Gold Saucer.

In a city of merchants, everything has a price, and business is placed upon a nigh-hallowed pedestal. Shopkeeps show scant mercy towards their rivals, and anyone who is cheated out of coin is seen not as a victim, but rather as a fool. To other Eorzeans, inhabitants of the city-state may seem as swindlers who worship nothing but profit. Nonetheless, the core of Ul'dahn values of hard work and daring have earned many men great fortunes in their lifetime.

Few vegetables grow in the heat of Thanalan, leaving Ul'dahn cuisine to consist largely of meats and insects, heavily seasoned with imported and local spices – though some claim this merely conceals fare that would normally be deemed unfit for consumption. Alcohol, on the other hand, is more highly appraised, as the arts of the Alchemists' Guild have led to distilling techniques leading to liquors of complex and subtle flavor.