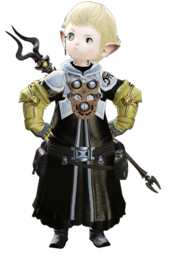 "It is precisely when things appear to be proceeding according to plan that we must needs steel ourselves for impending danger."

Papalymo Totolymo is a Lalafell.

After graduating second in his class at the Studium, Papalymo came to study under the famed Louisoix Leveilleur, and distinguished himself as a model student whilst aiding in his master's endeavors. Indeed, it was thanks to their tireless efforts that a group of Ala Mhigan refugees was granted sanctuary in the Sharlayan colony some twenty years past. It was during this time that Papalymo met Yda, and the two established a rapport. When Yda later expressed her desire to liberate Ala Mhigo, Papalymo introduced her again to Louisoix, which led to her induction into the Circle of Knowing. Since then, the two Archons have come to work together as a team—often bickering like an old married couple.The Scion has devoted his forty-two years to the study of the arcane, and indulges his passion by deciphering ancient spell tomes. A man with eyes as big as his stomach, he enjoys the traditional cuisine of his desert people, particularly dark pretzels.

The Aurifex: A treasure held by generations of Papalymo's family, this staff was bequeathed to him by his father, a fellow thaumaturge. Its name was earned for the gold glow the jewel set atop the staff's haft emits, and though it has seen many years, the weapon still serves as a stable nexus for potent magicks.

When Yda Hext was killed defending a young child, her sister, Lyse Hext came to Papalymo, wishing to continue her mission to liberate Ala Mhigo. Though he was against it, he used a Glamour spell to imprint a fake Archon mark on her neck, and requested that the rest of the Archons remain silent about her true identity. Together, the pair traveled to Eorzea, where they ended up in Gridania after their Airship crashed in the Black Shroud. When they were attacked by various monsters from the forest, they were eventually saved by an adventurer as well as the leader of the Conjurer's Guild, E-Sumi-Yan, and taken to the city proper.

Papalymo joined the rest of the Circle of Knowing in defending the realm against the invasion of the Garlean Empire. When the White Raven was defeated, Papalymo aided in spreading the message that the people of Gridania needed to pray to The Twelve in order to accumulate power that may be utilized to stop the Lesser Moon, Dalamud from destroying Eorzea. When Bahamut was released from the satellite, Papalymo and the rest of the Circle, as well as everyone present were teleported away by Louisoix, and the dreadwyrm was defeated, costing Louisoix his life.

Five years later, Papalymo and Yda remained in the Twelveswood, safeguarding it from various threats. When they discover an Aetheric disturbance, they meet with the Warrior of Light and slay a group of Treants who had been driven mad. The Warrior of Light passed out following this, and they brought them back to Gridania. Believing the Ixal had been responsible for the attack, the pair headed back out to continue investigating.

Later, when a "masked man" who was believed to be the true cause of all the turmoil in the forest appeared near the Guardian Tree, Papalymo, Yda and the Warrior of Light fought and defeated him. When he was revealed to be an Ascian, they invited the Warrior of Light to Vesper Bay to speak with their leader. At the headquarters of the Scions of the Seventh Dawn, Papalymo introduced them to Minfilia, Thancred, Y'shtola and Alphinaud, the other members of the Scions. The Warrior was formally invited to join, and undertook various missions for the Scions.

When Livia sas Junius attacked the Waking Sands, Papalymo was amongst those taken hostage by the Empire and held at Castrum Centri. He and his companions were rescued by the Warrior of Light and the members of the Garlond Ironworks. Later, he joined the Scions, the leaders of the city-states, and the Grand Companies in Operation Archon, an attack against The Praetorium to take out the Ultima Weapon and Gaius van Baelsar, the leader of the XIVth Imperial Legion.

Much later, when the Crystal Braves betrayed the Scions and aided in framing them for regicide, Papalymo and Yda fled, choosing to continue their original mission of liberating Ala Mhigo. They joined up with a resistance cell named The Masks, led by a man who only went by The Griffin. They witnessed the Griffin and the Masks undertake extremist attacks on the Garleans that often resulted in a mass loss of life.

When they were reunited with their Scion companions, Papalymo would request to hold on to the remaining pieces of Tupsimati, the staff used by Louisoix to defeat Bahamut. As it had been targeted before, he felt it would be targeted again simply for the abundance of ambient aether it contained.

At the attack on Baelsar's Wall by the Griffin, Papalymo battled against the members of the resistance to clear a path to the top of the wall for the Warrior of Light, where they battled against the Griffin, who revealed himself to be Ilberd Feare, the prior captain of the Crystal Braves. He revealed his motives for the false flag operation, that if he didn't do something drastic and force the hand of Eorzea, his homeland would never be free. Using the Eyes of Nidhogg that had been given to him by the Ascians, as well as the latent aether from the dead that littered the ground beneath him, he channeled his rage and hatred into summoning a Primal unlike anything seen before. Sacrificing himself, the ritual was complete, and the Primal began to take form.

Papalymo, recognizing the direness of the situation, took charge of the situation. Sending away his comrades, who mostly refused to leave unless otherwise forced, used the power of Tupsimati to invoke the same sealing spell used by Louisoix when he attempted to stop Bahamut. Yda tried to convince him to not go through with the spell as it would cost him his life, but he simply bid her farewell, and gave his life to stop the Primal for as long as he could.

When the seal on Shinryu finally broke, Yda knew that the last of Papalymo's life energy was gone. The Archon mark that had been glamoured onto her neck vanished, and she, fulfilling Papalymo's last wishes, left the identity of Yda behind, choosing to fight for her country under her true name and forged her own path.

Much later, when the Scions were passing through The Aitiascope to speak with Hydaelyn, Papalymo's ambient aether supported them, strengthening them in the fight against Ilberd's shade. The Warrior of Light also remembers his encouraging words when they were left alone in Ultima Thule, helping them continue on.