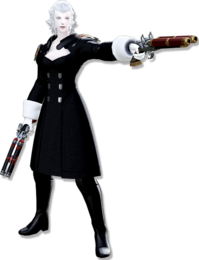 "Victory is a far-flung shore. Mark the skies, abide the tides, trust to your crew—and she will be yours."

The only daughter of Bloefhis Bloefhisyn, former captain of the League of Lost Bastards, Merlwyb Bloefhiswyn served as a member of flagship's crew until the day she learned that her father had consorted with the Sahagin. Betrayed and angered, she challenged Bloefhis to single combat on a deserted isle in accordance with pirate custom. She returned alone, and assumed leadership of the Lost Bastards.Thereafter, she sailed the high seas in the tradition of her people, the Sea Wolves, and discovered a safe route across the Indigo Deep to the recently discovered western continent. She is also known to have sunk an "invincible" fleet dispatched by the northern nations beyond the Bloodbrine Sea. With such accomplishments to her name, she entered the Trident, and emerged the victor. She has stood at the helm of Limsa Lominsa as Admiral since.Though Merlwyb has spent most of her forty-two years joyfully upon the seas, she can scarcely afford to sail the waves as Admiral. Instead, she indulges her second passion—fine wines. It is said her particular favorite is a deep chalice of Lohmani red.
Annihilator & Death Penalty: Once the property of the infamous pirate king, Mistbeard, these muskets are rarely parted from Merlwyb's side. She is rumored to have pulled the shorter of the two out of her pocket, and with it put paid to her father—hence its name, Death Penalty.

Merlwyb Bloefhiswyn is a Roegadyn found in Command Room.

Admiral Merlwyb Bloefhiswyn is a Sea Wolf Roegadyn who serves as the Admiral of Limsa Lominsa. She is both leader and founder of its Grand Company, The Maelstrom.

Once a member of the League of Lost Bastards and only daughter of its captain, Bloefhis Bloefhisyn, she served as a member of its flagship crew until she learned that her father had consorted with the Sahagin. In response, she challenged Bloefhis to a traditional pirate duel on a deserted island, killing him and assuming leadership of the crew.[1]

Merlwyb led the League of Lost Bastards to chart safe passage across Indigo Deep to the newly-discovered western continent, the New World and once sunk an "invincible" fleet in the Northern Empty. She returned to Limsa Lominsa in 1563 and emerged victorious in the Trident, winning the position of Admiral of Limsa Lominsa.[1] Not long after assuming admiralty, she saw to the signing of the Galadion Accord, outllawing piracy in Limsa Lominsa.

It's said that, as the forty-two year old Admiral can no longer freely sail the seas, she indulges in her second passion—fine wines—and favors Lohmani red.[1]

Merlwyb met with the Warrior of Light after they had stopped an attack by the sahagin Beast Tribe in Lower La Noscea. In their honor, she holds a banquet, and formally named them the envoy to the other City-states, in the hopes of reuniting the Eorzean Alliance. She also made an appearance at the ceremony held for the Warriors of Light who fought in the battle of Carteneau. Later, when the Kobolds summon Titan, Merlwyb turns to the Warrior of Light and the Scions of the Seventh Dawn to defeat the Primal, sending them to meet with the former members of the Company of Heroes, as they had previously defeated not only Titan, but also Leviathan in the past. When Gaius van Baelsar issued his ultimatum for Eorzea, she met with the other leaders to discuss whether they would surrender to the Garlean Empire or stand and fight. After some encouragement from the Scions, she and the other leaders decide to stand against the Empire, and formulate Operation Archon.

When the Sahagin begin preparing to summon Leviathan again, Merlwyb joined the Scions and the Warrior of Light in an attack on the Sapsa Spawning Grounds. There they fought against the Sahagain, and Merlwyb attempted to take down their priest, but he transferred his aether to another Sahagin, in a manner of possession similar to what the Ascians employed. Leviathan ended up being summoned regardless, and Merlwyb escaped with the Scions to formulate a plan.

At the suggestion of Eynzahr, they hauled a small vessel full of Corrupted Crystals that would neutralize the attacks of the great serpent. After the Primal had been defeated, Merlwyb admitted that the Beast Tribes had summoned their Primals out of necessity over the ever dwindling resources available on Vylbrand, and that if things continued the way they were going, only one or the other would be able to survive.

Much later, in an effort to end the Primal threat and unite all who call Eorzea home, Merlwyb reached out to the Beast Tribes in the hopes of achieving peace. She went head to head against Sicard, the right hand of Hyllfyr and pseudo leader of the Bloody Executioners in order to bring them under control. When she won the duel, Hyllfyr himself ordered the crew to follow Merlwyb's orders and do what is necessary for the good of Limsa Lominsa. After meeting with the leaders of the Beast Tribes and offering the ability to cure the tempered, the Beast Tribes joined the Eorzean Alliance.