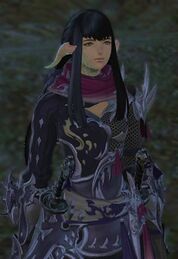 "To whom much is given, much is expected..."

Having witnessed the terrors wrought by the Garlean Empire, a young Yugiri made the pilgrimage from her Raen home to the village of the shinobi, seeking tools with which she might fight the Empire. Through years of inhuman trials, she learned the ways of the shinobi—how to fight from the shadows—eventually earning the rank of "jonin." Having thus mastered ninjutsu and being given the epithet "Mistwalker," she pledged herself to the remnants of the Doman general's clan. Thereafter, she waged a war against the Garlean Army.Alas, the rebellion ended in defeat, and the Domans lost everything. Obeying her lord's orders, Yugiri led a number of her countrymen in flight. Though the journey was long and arduous, she never allowed her people to despair, and, at the end, found them a new home. At twenty-six summers, she continues her fight alongside her the Scions and the Eorzean Alliance, but has not once forgotten about her homeland or her people's desire to one day return. Her lone indulgence is a bowl of rice doused in warm soup and topped with a small pinch of ground white radish—a Doman delicacy.

Unmarked Yoshimitsu Blades: These daggers were given to Yugiri by the Lominsan thalassocracy as a token of gratitude for her aid. Though they carry no name, the arms are said to be the work of the legendary weaponsmith, Yoshimitsu. Originally, they were forged as the blades of Far Eastern polearms, but have since been refashioned into their current form.

Yugiri is an Au Ra found in Ul'dah. 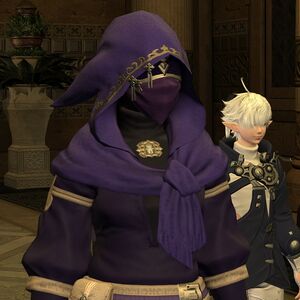 Appearance during A Realm Reborn 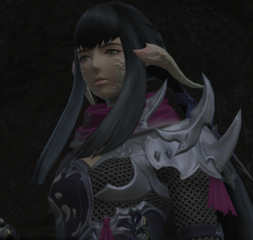 Yugiri was born in the underwater sanctuary of sui-no-Sato. She was a curious and adventurous child, and would often sneak to the surface with her friends to explore the outside world. When her friends would turn tail and run back home out of fear of the land, Yugiri would only venture further. She met a young Hyur boy around the same age as her, who would tell her of his home, Doma, and the oppression of the Garlean Empire, seeing it in person when they were caught by the Empire's soldiers, and were only spared in thanks to Gosetsu. Upon returning home, she pleaded with her parents and village elders to intervene out of fear of what may happen to her own home, however her pleas fell upon deaf ears.

Upon reaching adulthood, she left her village behind to learn how best to combat the Imperial army. In doing this, she broke the will of her people, and was forever banished from returning home by their ruler, the Ruby Princess. She became a master of Ninjutsu and joined the Liberation Front, only to be reunited with the boy who once shared the stories and woes of his people that drove her to action: Hien Rijin, the prince of Doma.

Following the death of Hien's father and Doma being razed to the ground as an example for the other conquered nations of the Empire, Hien bid Yugiri take their people away from the land and seek refuge in Eorzea. That very night, she led several ships full of Domans across the sea. Though they were turned away in Ul'dah by the Monetarists due to prior issues with immigrants and refugees from Ala Mhigo, they, thanks to the help of the Warrior of Light and the Scions of the Seventh Dawn, her people were welcomed at Mor Dhona in exchange for helping build the frontier.

As a show of thanks, Yugiri joined the Scions and helped them investigate the return of Leviathan, the Primal god summoned by the Sahagin. She demonstrated a mastery of knives and short blades in combat, reminiscent of Thancred's abilities. She later met with the guild that had trained him, and worked with them to train Eorzeans in the ways of Ninjutsu.

Following the betrayal and framing of the Scions by the Monetarists, she aided the few Scions who remained to escape to Coerthas, and began investigating the whereabouts of the missing members. She later assisted in locating and freeing Raubahn from Halatali, and helped infiltrate Baelsar's Wall to gain access for the Warrior of Light so they could attempt to reason with The Griffin. Following the failure of the mission and subsequent summoning of Shinryu, she joined the other Scions in guarding the Primal to make sure it wasn't roused from its stasis before it could be dealt with.

During this time, Gosetsu joined Yugiri and the Scions in awakening Omega to handle the threat that Shinryu posed, then urged Yugiri to return to their homeland to search for Hien, their mutual lord, who had gone missing following the failed uprising. Doing so, she set out to search for Hien.

Yugiri's travels eventually brought her to the Azim Steppe, where she discovered that Hien had turned up mortally wounded and on the verge of death. Though she tried her hardest, he refused to return to Doma until his people were ready to rise against the Empire. She returned to the House of the Fierce and relayed this to her companions. She sought to rally the people of a nearby village to her cause, however it quickly became clear that those who had remained in Doma under the Empire's heel had long been broken. None were willing to rise against their overlords, even becoming enraged at her for suggesting they march to their deaths.

Later, when the Empire took people from that same village, Yugiri and the Warrior of Light managed to rescue them and bring them back, this seemed to light a fire beneath the feet of the Doman people. Yugiri, having shown that the Empire was not as invincible as it seemed. It was right at this time that an Airship bearing Zenos yae Galvus, the crown prince of the Empire and commander of the XIIth Imperial Legion, to Doma Castle. Zenos made his way to the village, where Yugiri, going against the advice of her comrades, attempted to assassinate him. Easily deflecting her attack, Zenos proceeds to defeat both her and the Warrior of Light. Just as he is about to deliver the final blow, however, the villagers who she had saved and risked her life for came forward, baring makeshift weapons at the prince. Though he could have easily dispatched them all then and there, he left for the time being. Yugiri took her peoples' bravery in the face of the crown prince as a sign that they were ready for a rebellion.

Returning to Hien, Yugiri relays what happened in the village, and helps him and the Warrior of Light convince the Au Ra of the Steppe to join their cause. She led a team in the battle at Doma Castle and helped secure a path to the throne room for the Warrior of Light. When the castle was brought down to bring an end to the Empire's reign, she witnessed the bravery of Gosetsu as he risked his life to save them. Believing him dead and wanting to honor his memory, she joined once again with the Scions and Hien to help in the liberation of Ala Mhigo. She also took part in the negotiations with Asahi sas Brutus to exchange prisoners of war, and helped evacuate everyone when the plan turned out to be a cruel trap.

With the liberation of both Doma and Ala Mhigo, and the Garleans seeming to prepare for an all-out invasion of Eorzea, it came time for the Three Great Continents to band together and form an alliance. Yugiri was instrumental in this, attending the meetings and bringing in other smaller factions to join the fight.

She helped battle against the Empire in the Ghimlyt Dark, helping to repel their forces until Elidibus arrived in the body of Zenos and attacked, forcing her and Hien to retreat. She later helped organize the Eastern Alliance, and helped hold off the Empire's forces while the Warrior of Light was occupied in Norvrandt.

Once the Dynamis of Eorzea began transforming those who were overcome with emotion into creatures known as Blasphemies, Yugiri assisted the Warrior of Light and Hien in hunting a particularly powerful one born from a woman named Minato. The people of her village named it Izanami, believing it to be a god or "Kami", thanks to the machinations of Kisei, who performed fake rituals to justify the monster murdering people, as she herself believed her daughter had become a god thanks in part to her supposed powers as a medium.

Yugiri believed that Kisei may be from her village of Sui-no-Sato, and after they were unable to send a party of Kojin in to gather information for them, she suggested going in herself, albeit in disguise, as she was still banished. They learned from Yugiri's mother Yanagi that Kisei did in fact once live in the village, but was cast out, as it was believed she was possessed by spirits. Yugiri was also able to receive some amount of closure, as her parents told her to pass on to their daughter that they were very proud of her.

Upon returning to the village, the villagers were attempting to offer sacrifice to the Blasphemy under the guidance of Kisei, however, she was proven to be a fraud by Gosetsu, thanks in part to what he had learned on his pilgrimage. He joined the group as they went to the Swallow's Compass to prepare a rite of passage for those killed by the Blasphemy. It was here that Kisei attempted to assassinate Hien, however Yugiri protected him, taking Kisei's life instead. This drew the Blasphemy, and she assisted in slaying the beast. She later attended the funeral for the villagers who were lost, and returned back to Doma soon after.