"Without the illumination of knowledge, we but vainly flail as specters in the dark."

Y'shtola Rhul is a Miqo'te. 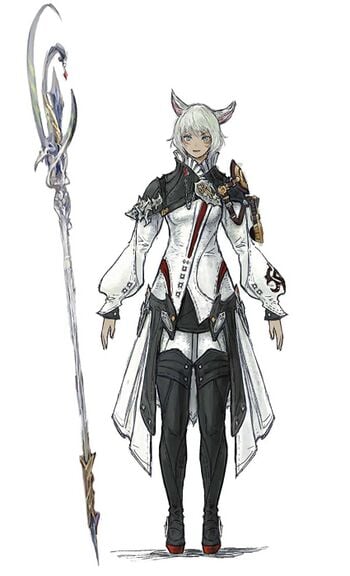 From a young age, Y'shtola showed a tremendous talent with magic, and was sent for tutelage to the famous Archon Matoya at the age of seven. This displeased Matoya, who thought it little more than a chore passed onto her by her fellow Archons. In order to rid herself of the girl, she devised a particularly strict regimen, and forced it upon Y'shtola. However, the Seeker of the Sun is unyielding by nature, and struggled through, stoically continuing where an adult would have given up. Perhaps Matoya recognized something of herself in the stubborn girl, for in time the Archon began to treat "Shtola" properly as her student. After a decade spent in Matoya's Cave, Y'shtola emerged and took her place amongst the other Archons as an expert in the arcane arts.
The hands of time ever stopped at twenty and three, Y'shtola has, during her time as an Archon, forged a special bond with Yda—one out of necessity, considering the lack of refinement displayed by the young firebrand. The Archon is also known to have a great collection of footwear, and an unexplainable fear of aureliae.

Truthseeker: Wishing to gift Y'shtola a weapon worthy of its bearer, Tataru procured a length of rare petrified wood and commissioned renowned conjurer E-Sumi-Yan with the creation of a staff to rival any and all the realm has seen. After purifying the branch in the crystal-clear waters of a Twelveswood stream, Brother E-Sumi-Yan sanctified it in the presence of the elementals, thus earning the beings' blessing. By report, Truthseeker requires great skill to wield, but grants great power to those who can.