Ensconced in a lonely northern archipelago and ever blessed by the wise auspices of Thaliak, the gleaming white edifices of this city stand at the center of Sharlayan society. First among many dedicated to the pursuit of knowledge and scientific advancement is the Studium, the world's most prestigious place of learning.

Sharlayan is a city in The Northern Empty. 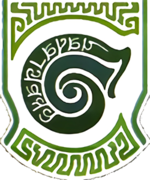 When Thaliak poured the waters of knowledge into His river, the spiral shell became their keeper--such is the legend wherein the nautilus came to symbolize wisdom. In addition, men have believed that mollusks lived forever from time immemorial. It is to capture the essence of these meanings that Sharlayan's flag bears a green spiral shell emblazoned upon a field of silver.

When the Sharlayan had but few inhabitants, all adults came together in the Ecclesia to speak their mind upon decisions of nation. As their numbers grew, they have come to elect to the Forum those officials who they feel best represent the will of the people. The speaker of the Forum serves as the head of state, but his power is greatly restricted by law.

Sharlayan is led by a government of the people, for the people. There is no one leader. That said, several prominent Forum members (such as Fourchenault Leveilleur) exercise executive authority and speak on behalf of the nation as diplomats.

The Forum: The highest body in the nation, members of this gathering are elected through votes cast by their fellow Sharlayans.

Unknown
Note: Though its citizens are diverse, Sharlayan does not make population statistics public in the interest of equality

The people of Sharlayan came together in the pursuit of knowledge. The city itself was raised to aid in this endeavor, and in the process Thaliak was named the guardian deity. However, the choice had less to do with pious worship than the creeds of the Sharlayans. Thus, little importance is placed upon religious rites, and many pray to others among the Twelve.

Through long years of studying aether and magic, Sharlayan scholars have mastered the secrets of traversing the Lifestream through aetherytes. Indeed, by building and maintaining Eorzea's Aethernet, they have secured a steady source of foreign currency.

With scholars and Archons penning discourse upon discourse, it is no surprise that the city has a robust publishing industry. These learned treatises are prized by Eorzean academics and artisans, who willingly pay great sums to learn of Sharlayan's latest findings.

Starting with the prestigious Studium, Sharlayan has numerous famed academies that accept students from all nations. In times past, Eorzean pupils eagerly flocked to Sharlayan's settlement in the Dravanian hinterlands from all corners of the realm. There, they studied a multitude of subjects from different fields--though it seems instructors reserved certain wisdom for those of Sharlayan citizenship alone.

For greater purposes, Sharlayans seek to gather the knowledge of the world, and preserve it for posterity in the pages of Bibliotheca Historica. They covet the unknown and unexplored, and put great value upon education--in part as a gathering of like-minded fellows. They also abhor bloodshed, find war barbaric, and would never dream of allowing their wisdom to be used for martial purposes. As such, they guard closely all knowledge they deem dangerous.

As one might expect, food is oft taken as an object of study, and Sharlayan is rumored to hold countless tomes detailing fare from all over the world. However, the delicacies they create are strictly academic purposes--and not for anything as base as eating. The everyday fare of the city is good for the body, but otherwise quite bland. Accordingly, many groans can be heard from foreign students come meal time.

The Dravanian hinterlands attracted students from all across Eorzea, and grew as a beacon of knowledge and wisdom. Yet, this was not to last. In 1557, tidings that Garlemald had captured Ala Mhigo reached the city. To the Sharlayans, the Empire was a threat to their very way of life. They had spent an age stubbornly resisting all war, and the imperial invasion of Ilsabard and Othard was a bane to the values they had held since Nyunkrepf's time. Sharlayan sent ambassadors to Garlemald with entreaties to stop their advance. They even strove mightily to parlay a peace, but all these pleas fell on deaf ears, and the envoys returned home empty-handed. In the wake of the failed negotiation, Fourchenault Leveilleur and the faction he led within the Forum elected to forsake their colony. Following five years of elaborate and painstaking preparation, the plan to evacuate the settlement's entire population to the northern archipelago of their homeland was put into motion. In 1562, the city of Sharlayan became a maze of empty streets and buildings in the space of a single evening.

With much aplomb, Urianger ignored Moenbdryda's nigh-constant pestering; however, the stubborn young Sea Wolf would not be put off so easily, and could oft be found lurking beside the boy, reading complex treatises over his shoulder. The two eventually grew close, and it was not uncommon to see the two late at night in the Great Gubal Library hunched over a stack of tomes and a smuggled plate of cockatrice meatballs.