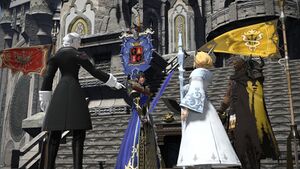 Aymeric, Merlwyb, Raubhan and Kan-E-Senna crossing weapons in resolve of their nations to stand by one another.

The Eorzean Alliance is the unified political and military alliance between the great nations of Eorzea, though it has recently expanded to cover other nations, such as Doma and Ala Mhigo as well.

The Start of the Alliance

In the Sixth Astral Era, there was a time of much war and conflict between the nations of the Three Great Continents and the various Beast Tribes of the lands. After several centuries of bloody conflict, the nations of Ul'dah, Ala Mhigo and Limsa Lominsa and Gridania rose up over their neighbours. Tired of fighting and constant bloodshed, the people of Eorzea sought to band together and learn to coexist in peace. Aggressive tactics were abandoned for diplomacy, and each nation shared what it had with one another. The city-states of Ul'dah, Gridania, Limsa Lominsa, Ishgard and Sharlayan grew to be the center of civilization.

However, with peace reigning, the people feared for the loss of their ways of life by the influx of new people and ideas. Craftsmen and warriors banded together and created guilds, coveting the knowledge of their practices and trades. They used this knowledge to build partnerships and secured financial stability.

The peace would not last forever, as Ala Mhigo sought to expand their territory into the Black Shroud, and launched military campaigns into Tinolqa. This would eventually come to be known as the Autumn War.

When it seemed that the nation of Gridania would fall to the might of the Ala Mhigan forces, the states of Ishgard, Ul'dah and Limsa Lominsa sent their armies to aid Gridania and put Ala Mhigo to rout. After this, borders were set and treaties were signed. While the city-states would remain independent, one rising against another would not be tolerated by the others. This was the beginning of the Eorzean Alliance.

Enemy of the Alliance

At the same time, the nation of Garlemald had begun to rise in Ilsabard, and was steadily conquering their enemies with powerful warmachina and other Magitek. The leader of the republic, Solus Galvus, after taking the entire continent of Ilsabard, declared Garlemald an empire, and himself the emperor. He then set his sights and his armies, which grew larger with the assimilated peoples of the nations he took, to the continent of Othard, and claimed the entirety of the continent under the Garlean standard. The nation had now taken two of the three continents. Garlemald then turned to Aldenard.

The Garlean Empire took advantage of the instability of Ala Mhigo after the uprising against their king, and invaded the land, conquering it completely. The Alliance came together to oppose the empire and drive them from the land. The Sharlayan people refused to join in against the empire, instead sending an envoy to Garlemald to engage in diplomatic proceedings. These fell through however, and the scholars then decided to abandon the colony in the Dravanian Hinterlands and return to their homeland.

Troubles of the Alliance

After the assimilation of Ala Mhigo, the Empire sought to hasten the progress of the Eorzean campaign, and sent the Agrius over Mor Dhona over Silvertear Falls. It was then that the Garleans were set upon by the Dragons and Midgardsormr, the forgotten guardian of the lake. A great battle ensued, and ended when the Agrius was sent careening into the lake after colliding with Midgardsormr.

Within their own lands, the beast tribes began rising up against the people, summoning their gods, Primals, to attack the nations and enslave the people through Tempering. These gods were deemed a threat to their rule and made the target of the Empire. The Alliance was stretched thin handling both the threat of the Primals and the Garleans, and with Ishgard battling against the Dravanian Horde as well.

The Fall of the Alliance

With the fighting growing more and more intense on all sides, Ishgard withdrew from the Alliance, unable and unwilling to divert their military power away from the growing threat of the Dravanian Horde, citing the halting of the Eorzean Campaign after the Battle of Silvertear Skies as the end of the war. and for a time there was calm, as the Imperials in Ala Mhigo constructed Baelsar's Wall on the border between Gridania and Ala Mhigo, and it seemed like war would be gone from the land forever. Those who partook in warfare now found themselves without work, and turned to the newly formed Adventurers' Guild.

This temporary peace came to an end as Garlean warships moved over Baelsar's Wall, and the Imperial army resumed the Eorzean Campaign. The war continued, and many battles over several years raged, with the culmination of the Battle at Carteneau and following destruction of Eorzea by the elder primal Bahamut after the fall of the satellite Dalamud.

Once the great wyrm had disappeared and the people were left to reckon with the destruction, the city-states began to rebuild. Through this, each nation was also beset by an increase in the primal threat from the beast men. Under such pressure on all fronts, the Alliance slowly drifted apart, with each nation tending to its own people.

The Rebirth of the Alliance

To face against the rising threat of the beast men, primals, the Garleans and now the Ascians, the Scions of the Seventh Dawn petitioned the leaders of the nations of Eorzea to bring them together, citing the strength of the people of Eorzea being much greater together than apart. The Alliance was reborn once again and strove to drive the Garleans from their lands once again.

The Alliance grew stronger still after the culmination of the Dragonsong War, in which the Alliance, the Scions and the Warrior of Light came to aid Ishgard and bring the truth of the start of the war to light, and bring it to an end. The Ishgardians then rejoined the Alliance, swearing to be stout allies and stand with the nations against any foe.

Following this, and the actions of the Griffin, the Alliance became embroiled in the conflict of the Ala Mhigans rising up against the Empire. After an attack by the Imperials and the crown-prince he Alliance and the Scions sought to divide the focus of the Imperials, and set out to cause uprisings in Doma after hearing that their king, lord Hien sought to drive the Empire from their lands as well.

Strengthening of the Alliance

After many battles and a successful attack on Doma Castle, the nation was freed from Imperial grasp. As expected, this caused the Empire to split their forces, and further divided their attention when the story of the Doma liberation sparked resistances to rise up all over the Garlean territories.

The alliance and the Ala Mhigans used this chance to push the Garleans back to the very edge of Ala Mhigo, and finally, after the defeat of Zenos at the top of Ala Mhigo Castle, Ala Mhigo was free.

Knowing the Empire would seek to reclaim the lands they lost, Doma and Ala Mhigo joined with the Alliance and strengthened their numbers further. The Alliance sought to seek peace with the Garleans and bring an end to their war. They met with Emperor Varis zos Galvus himself, who after their treaty fell through, declared war on Eorzea.

The nations battled against the Garleans at the Ghimlyt Dark, and it seemed they had reached a stalemate, when there was suddenly much commotion in Garlemald. The death of the emperor had caused a war of succession, and the country was tearing itself apart. Taking advantage of this chaos, and with a newly discovered way to reverse Primal tempering, the Alliance reached out to the beast tribes to reconcile and unite with them against the remaining Empire threat.

At this same time, strange towers began appearing across the land, and all that approached them seemed to become tempered and under the power of the Garlean Empire. It is at this time a speaker for the remaining Ascians comes forth in the body of Asahi, Fandaniel says that unlike the Unsundered Ascians, he and his group, the Telophoroi intend to destroy the star, not Rejoin it. It is revealed that the towers are somehow being used to temper any who are too close or are taken there, and their life essence used to summon Lunar Primals, whom Fandaniel has said are instrumental in the destruction of Hydaelyn.

The Telophoroi made to attack and capture many of the Amalj'aa to summon Lunar Ifrit. As a show of faith and their intent to unite with the beast tribes, the Alliance took to Paglth'an to rescue the Amalj'aa and drive off Lunar Bahamut. Seeing this, the beast tribes entered into a tentative agreement to join the Alliance. To mark the occasion, Alphinaud Leveilleur suggested the name "The Grand Company of Eorzea" to represent the total unification of all peoples of Eorzea and their battle against the Garlean Empire and to stop the plans of the Telophoroi.