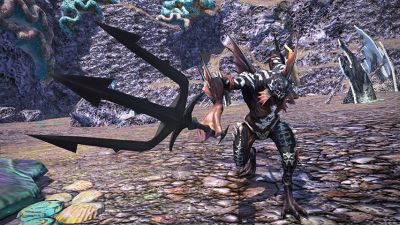 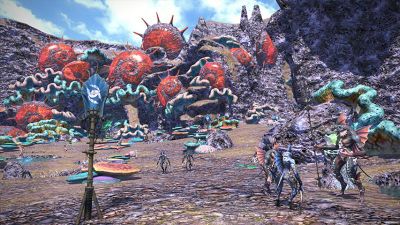 This aquatic race of beastmen reside in a city built at the bottom of the Indigo Deep. Known for attacking ocean-faring ships and dragging sailors screaming into the murky depths, the Sahagin are often the subject of angry and fearful curses on the streets of Limsa Lominsa. Since the advent of the Seventh Umbral Era, these hostile denizens of the sea have taken to seizing territory along the Vylbrand coastline in order to establish new spawning grounds. On The First, they are known as the Ondo.

The webbing and fins adorning the wiry frames of the Sahagin allow them to glide through the depths with uncanny grace and swiftness. They are also able to remain submerged indefinitely by breathing through their gills, making any protracted underwater clash with the scaled beastmen a reckless proposition at best. Even on dry land, however, the Sahagin are not to be underestimated, the coiled strength of their springlike musculature lending explosive force to their attacks.

The Sahagin diet consists primarily of fish and shellfish. Such fare is cooked without the aid of fire, the vent-heated water of hot springs used to flake flesh away from bone or boil fish broth in which the tough meat of axolotls is stewed until tender. Sahagin are not entirely carnivorous, and are known to consume a variety of seaweed as well as fruits-La Noscean oranges being a particularly popular treat amongst the younger spawnlings.

Sahagin society is governed by an egg-laying queen-the Indigo Matriarch, outside of her spawning season, the matriarch remains ensconced within the palace, ruling her subjects from her throne on the ocean floor. It is claimed that when the queen becomes infertile with age, she will appoint a new Indigo Matriarch from the most promising young females before taking deliberate steps to end her own life.

The Sahagin population is overwhelmingly male, with females accounting for less than a tenth of their number. From this small pool of females, the most dominant and capable individual ascends to the throne of the Indigo Matriarch-a position from which she bequeaths clutches of eggs to those male champions proven worthy of her favor. A male Sahagin who has thus earned the mantle of clutchfather will construct a nursery in the coastline's shallows, raising his adopted offspring on land until the spawnlings become sufficiently developed to breathe through their gills. During this period, the clutchfather teaches his charges everything a young Sahagin needs to flourish: from efficient swimming and fishing methods who hatched from earlier clutches often assist with such instruction, a practice which well explains the race's tendency towards strong familial bonds.

In the rare cases that a female is born, she is sent to live in the matriarch's palace deep beneath the waves, where she is carefully groomed alongside her sister Sahagin as a candidate for future queen.

Sahagin names consist of short and unique combinations of letter-qualities that are believed to have arisen from the need to facilitate communication in underwater environs. Furthermore, neither family nor clan names exist, with individuals commonly referring to their clutchfathers when identifying their lineage. It is also said that while clutchfathers are responsible for naming their adopted sons, the right to name daughters is the sole province of the Indigo Matriarch, with the queen deciding such appellations when young females are first brought to her court.

Sahagin are accomplished spearfishermen. The practice of coordinating efforts to herd and corner their agile ocean prey also serves to educate spawnlings in the basics of waterborne warfare.

The Sahagin have long prowled the Indigo Deep for trading ships, seeking to plunder the wealth of seafaring nations. The scaled beastmen are said to feel no remorse for such acts, considering piracy to be different from fishing only in the size of the prey.