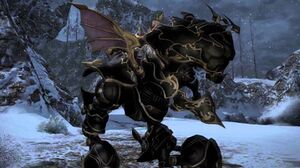 A suit of Magitek Reaper armor patrolling in the Coerthas Highlands.

Magitek is the brainchild of Solus Galvus (At the time of its inception he had not yet become emperor and had not received the title "zos"). After its creation, it was used by the Garlean Empire to become one of the most powerful nations on the Three Great Continents.

Before the discovery of Ceruleum and the invention of Magitek, the winters of Northern Ilsabard were harsh and dangerous. The small collection of villages would not often have enough supplies to get through the hard winters, as the lakes were frozen most of the year round, and bounties of nature, including rearing animals and crops were only available for a short time. Between that and the attacks by more developed villages and tribes around the area, the Garleans came to realize they needed to band together in order to survive. Coming together and searching for a way to survive led to the discovery of Ceruleum, a strange blue liquid that burned much better and longer than oil, and kept the Garleans warm during the winter.

In desperation, to handle the attacks and raids on their villages and settlements, the Garleans employed the Roegadyn mages of the mountains to help bolster their own army. They also became experts in subterfuge, attacking from the shadows and using spies to gather information on their enemies. This was the way they survived until the early 16th century, when Solus Galvus, a soldier who quickly moved up through the ranks of the military, learned of the newly invented Ceruleum engine, and saw limitless potential within it.

Using this engine, Solus Galvus engineered Magitek weapons and warmachina and integrated them into the army. This ended up giving Garlemald a huge tactical advantage, as they were able to not only defend themselves, but invade and conquer other nations. This Magitek were employed in other areas aside from war making, improving the lives of the people of Garlemald, from day-to-day life to transport and agriculture, the use of Magitek greatly turned the fortunes of the Garleans, and made their inhospitable climate much more tolerable.

After the Garlean Empire was established and Solus zos Galvus became the self-appointed emperor, he established the Magitek Academy. This school was to act as both a research facility to develop more Magitek, as well as a place of education for aspiring engineers. The chief engineer, given the title "nan", serves as the head of the academy.

The academy only accepts the best and brightest from all over Garlemald, and even then, very few actually complete their six-year study. After they finish their education, the alumni are allowed to either continue as researchers, or can join the military as Magitek technicians.

While Magitek exists in all aspects of life in Garlemald, the main focus of the Magitek Academy is its use in warfare. The Empire has developed several weapons and mobile suits of armor to make the conquering of nations far easier than it should be.

While used as transport by the citizens and common folk, these flying machina were born of a need to traverse into enemy territory. Running off Ceruleum propulsion engines and using Aether-treated wings, they use a buoyant gas as their fuel source.

Built and piloted by the surviving VIIth Legion, these large weapons were built to be successors to the Ultima Weapon. They employed the use of Synthetic auracite and were able to absorb and use the aether of Primals. With the use of synthetic auracite, the Empire were able to program combat techniques into the machina, however they required the use of Oversoul, a system that would link the life force and physical body to the machine, to make the proper use of the combat data therein.