This article is about the character. For the boss of the Extreme Trial added in Shadowbringers, see Varis yae Galvus. 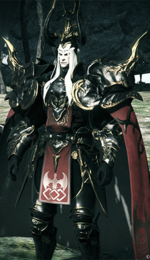 "'Tis my solemn charge as emperor to bring the eikons to heel."

The second Emperor of Garlemald, Varis zos Galvus has many achievements to his name, having served as High Legatus for nine years. He is thus said to favor his grandfather far more than any other member of the royal family. Yet, he did not become Emperor without a fight. Indeed, his uncle—the second son of Solus zos Galvus—also laid claim to the throne, supported by one faction that opposed Garlemald's expansion policy and its mandate to eradicate all eikons. A war of succession ensued and Varis emerged victorious. Though he is said to respect his grandfather's achievements, it has been reported that he also blames the first Emperor for inviting the internal strife by being too lenient with his own son.Varis's tactical genius displays itself in "megalith," a traditional Garlean game of strategy. Indeed, it is said that the Emperor has but rarely lost a match in all of his forty-six years.

Varis zos Galvus is a Garlean.