Hailing from the distant shores of Ilsabard, the Hrothgar are a burly people of lionlike appearance—or the males are, at least. Females number staggeringly few among their population, and thus are rarely so much as glimpsed by the other races.

The Hrothgar's imposing countenance─mitigated not at all by their sharp claws and still sharper fangs—incited panic amongst Eorzeans upon their arrival. As they were also unable to communicate, initial interactions with the commonfolk often escalated into conflict. It was not until the Hrothgar gained mastery of the common tongue that fears were allayed, and in time they would be as neighbors, welcome in all corners of the realm. The bulk of Hrothgar remain concentrated in the areas in and around Bozja, where they continue to struggle to liberate their homeland from the empire and rebuild.

On The First, this race is known as the Ronso after the Final Fantasy X race on which they were based.

Currently, only male Hrothgar are playable, but female Hrothgar will be added some time after the release of Endwalker.

The Hrothgar are separated into two clans, the warm-colored Helion and the winter-furred The Lost. In ages past, the Helion's of southern Ilsabard served under a singular matriarchal rule, their lives revolving around their queen.

By contrast, The Lost are a nomadic clan known to undertake many trade professions, from peddlers to mercenaries. They're hesitant to take up occupations that restrict their traveling. Their cold fur is said to be a symbol of their independent nature, driving them away from the warm embrace of their queen.

The Gunbreaker job originates with the Hrothgar, who have passed the art of the gunblade from generation to generation. Originally employed by Queen Gunnhildr's personal guard, the weapon combines a sword with a firing mechanism, emitting a range of magical effects by utilizing aetherically imbued cartridges. 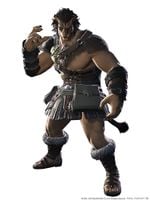 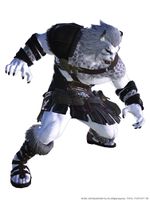 Hrothgar cannot choose hairstyles, as they are tied to the Face option, though the aspects can be customized more freely, such as locks and fringes. Their fur patterns can also show up on their tail and the length of their canines can be adjusted. Initially, headgear was invisible on the Hrothgar's model due to their unique look, but after feedback, the development team made adjustments so that some would appear, such as glasses, visors, and circlets, as well as a few helmets.

Hrothgar forenames are based on old Slavic names, though the word "glory" in Hrothgar is "thgar" instead of slav.

Due to the unique nature of the "clan" conventions of the Hrothgar, their names were sorted by social status by scholars of other races rather than a native invention.

Male Helion surnames are based on the queen they served as, the "clans" named by scholars after the way their lives revolve around their queen, much like celestial bodies to a sun. Helion queens themselves are given the letter A as a prefix, meaning "in service of". If their queen is alive at the time of their birth or still living as acting queen, their name is to be prefixed with A. Examples include:

As Lost do not serve a matriarch, their surnames are given the suffix "sch" meaning lost, replacing the prefix A used for Helions. Examples include: