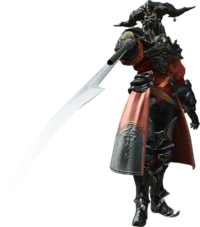 "He who cannot preserve the sovereignty of his nation is unfit to rule it."

Legatus of the XIVth Imperial Legion, Gaius is a pure-blooded Garlean of fifty-six summers possessed of a natural flair for wartime command, perhaps equaled only by his sensibilities as a governing administrator. Known as the Black Wolf, his many accomplishments include the conquest and political assimilation of five enemy cities. In subjugating Ala Mhigo, he employed subterfuge to stoke the fires of civil unrest, a masterstroke which led to the nation's capture without the need for a protracted siege. Though he remained in Ala Mhigo as the imperial viceroy, he began to move against Eorzea again shortly following the Calamity. Gaius fights as would become a hero of the Empire, valiantly wielding Terminus Est, a most difficult and deadly battle technique.
Heirsbane: Midas nan Garlond sent Heirsbane to his dear friend Gaius when the latter attained the rank of legatus. The gunblade is said to have spilled the blood of nine aspirants to the crown in times past.

Gaius van Baelsar is a Garlean.

Gaius van Baelsar is a boss found in The Praetorium.