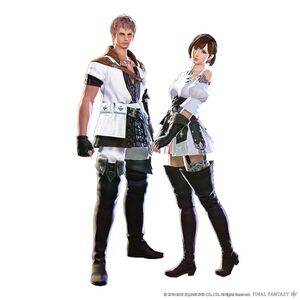 The Midlanders dwell in the low-lying regions of Eorzea.

Dwelling in the realm's low-lying regions and hailing from a wide variety of ancestral homelands,[1] the Midlanders (ミッドランダー族, "Middorandā Zoku," meaning "Midlander Group") comprise over half of Eorzea's Hyuran population, making them the most populous clan of its most populous race. They can be found in city-states and villages the realm over, in myriad trades and vocations as diverse as their heritage.[2][3]

Midlanders have traditionally compensate for their lack of exceptional physical prowess with enterprise and ingenuity, contributing to advances in all manner of disciplines. Many of the realm's greatest inventors and innovators have been Midlanders. While some exceptions exist, Midlanders are trained in letters from infancy, giving rise to a healthy population of academics and intellectuals.[2][3]

When the Hyur first came to Eorzea in the First Astral Era, they were one undistinguished race among many. Their most distinguished feat was the creation of the alphabet still in use to the modern day, an invention of Hyuran priests during the Forgotten Age.[4] This lack of distinction only changed in relatively recent years; during the early Sixth Astral Era, Midlanders flooded into Eorzea, chiefly from Ilsabard in the northeast (but also from surrounding islands) to all corners of the realm. These three great migratory waves, took place around the 350th, 660th, and 750th years of the era.[5]

The first migratory wave displaced the Elezen who called central Aldenard home, which eventually led to the founding of Ishgard. The second migratory wave saw still more Elezen forced to seek solace in the Black Shroud only to be invaded by Midlander settlers only fifty years later. This led to territorial conflict with the Elezen, until they reconciled their differences around the year 740 and founded the nation of Gelmorra together. The third migration saw Midlanders, such as Albin the Ashen, invade Thanalan only to be dispatched by the Dunesfolk Lalafell of Belah'dia.[5]

Despite this, it seems Midlanders came to dwell in the city-state of Belah'dia before its dissolution during the Belah'dian Civil War. One of the first paladins of the Sultansworn of Ul'dah, Jhal Tristram the True, was a Midlander Hyur sworn to the service of Ul'dah's founder Sasabal Ul Sisibal I.[6] Large numbers of Midlanders also came to dwell in Limsa Lominsa—some seeking a free life, others abducted by and assimilated into pirate bands.[5]

The Midlander mages of Gelmorra, led by Jorin Lightheart, were the inventors of conjury, which they used as a means to establish communion with the elementals. Together with the majority of the Elezen denizens of the subterranean city-state, they founded the nation of Gridania above the ground in 1706. Soon after, Jorin had a son who would come to be the first Padjal, I-Ohok-Pota. From that point forward, some Hyuran families of Gridania would give birth to horned children, who would be raised amongst their own kind in Stillglade Fane. The Midlander population of Gridania was stricken by the Creeping Death in 1322, which killed many of the Hyur until a cure was found five years later, forever changing the demographic of the city-state.[5]

In modern times, Midlanders dwell in significant numbers in Ul'dah, Limsa Lominsa, Gridania, Ishgard, and Ala Mhigo. They are also found in Old Sharlayan in the Northern Empty, as well as in smaller villages across the realm.

Midlanders lack the endless stamina of the Roegadyn, hawk-like eyes of the Elezen, hound-like noses of the Miqo'te, and deer-like ears of the Lalafell, and even lack the muscle-bound builds of their Highlander cousins.[7] They are average of both build and height, with any man over seventy-two ilms seen as rather tall, and the tallest women rarely reaching sixty-seven ilms. They do, however, possess an aptitude for magic, and Midlander mages adept in teleportation magic serve a vital role in many adventuring parties.[3]

Because they boast myriad languages and cultural backgrounds rooted in their respective places of origin, the Midlander Hyur lack any universal sense of cultural identity. Like other clans of Hyur, they value personal freedom and distinguish themselves in a wide array of disciplines with little concern for tradition or heredity. Midlanders are quick to adapt to local customs and traditions wherever they settle, and excel at refining new knowledge. For example, a Midlander chef invented bouillabaisse based on the simple seafood stews favored by Sea Wolf fishermen.[3]

As the Midlanders contributed to the Eorzean alphabet, they show a proclivity for letters, and have made considerable contributions to literature. This also extends to the fine arts, and Midlander artists were the first to employ perspective in their paintings.[3]

Midlander names are made up of words in the common tongue, with surnames derived from one's vocation, place of residence, or the physical appearance of an ancestor. Names like "Baker," "Miller," and "Fisher" are common examples of surnames from a family trade, while a surname like "Stone" might refer to an ancestor who lived near a rocky outcropping, or one with a stubborn personality comparable to hard stone.[3] They are similar to Anglo Saxon, Celtic, and Briton names that appeared in medieval (pre-17th century) Europe in real life.[10]