"Till Sea Swallows All."
On the southern coast of the island of Vylbrand, under the shadow of ancient cliffs worn by the relentless onslaught of the Rhotano Sea, lies the maritime city-state of Limsa Lominsa. Said to be blessed by the goddess of navigation, Llymlaen, the city is spread out over countless tiny islands, pillars of rock and reef that jut out from the bay, each connected by long, sturdy bridges of iron and wood construction, earning her the name the "Navigator's Veil" from traveling bards who have witnessed the city's beauty from afar.

Limsa Lominsa is a city in La Noscea.

“On the southern coast of the island of Vylbrand, under the shadow of ancient cliffs worn by the relentless onslaught of the Rhotano Sea, lies the marine city-state of Limsa Lominsa. Said to be blessed by the goddess of navigation, Llymlaen, the city is spread out over countless tiny islands, each connected by sturdy bridges of iron and wood construction, earning her the name the "Navigator's Veil" from traveling bards who have witnessed the city's beauty from afar.

Limsa Lominsa is a traditional thalassocracy, with power lying in the hands of the ruling party and its leader, the Admiral. Its economy is driven by shipbuilding, fishing, and blacksmithing, but the majority of wealth comes from the lucrative shipping industry.

To maintain the safety of its maritime routes, the city employs a formidable navy known as the Knights of the Barracuda. However, even in the waters nearby the city, pirate bands run rampant, reaving and pillaging.”
—Game Description

Limsa Lominsa is one of the starting cities in Eorzea. The maritime city-state of Limsa Lominsa, located on the southern coast of the island of Vylbrand, is built within and across steep, white rocks and reefs within Galadion Bay. It is the largest and most famous port in the realm, and has a long history of nautical trade and piracy. Merchants from all over come to ply their wares in Limsa Lominsa, be they from across the Rhotano Sea on the continent of Aldenard or as distant as the New World to the west of the Three Great Continents.

Limsa Lominsa has the following Guilds: 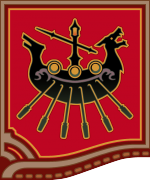 The obsidian longboat upon Limsa Lominsa's standard is a pirate ship, and hearkens back to the founders of the city: brutal Sea Wolf buccaneers, once the terror of the north seas. It should come as no surprise, then, that the crimson field represents the spilled blood of lost companions, and reflects the city-state's savage and gruesome history.[1]

Til Sea Swallows All

Lominsans choose their leader in the Trident, a competition held once every seven years. The strongest of pirate crews run this multi-pronged race, and whosoever crosses the finish line first becomes admiral, the head of the maritime city-state. Afforded sweeping powers over Limsa Lominsa, new admirals will often drastically alter existing policies—and with it, change the course of the city-state.[1] 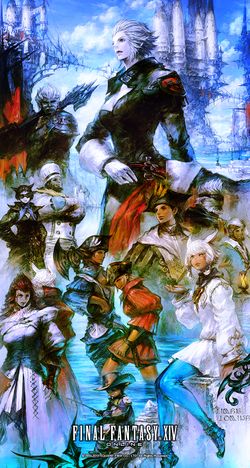 A number of councilors, nominated personally by the admiral, oversee the everyday proceedings of the thalassocracy.[1]

As one might expect for a maritime city-state, Lominsans revere Llymlaen, watcher of the seas and goddess of navigation. True believers make pilgrimages to the mark of the Navigator before they set sail, and upon their safe return to port. The worship of Lymlaen has roots in a loose collection of local beliefs, however, and thus cannot be thought of as a formal religion. Indeed, the Navigator has no grand temples nor clergy to Her name in Limsa, save the odd bethel overlooking the endless seas. Instead, each man keeps his own faith within his home through prayer and humble ritual.[1]

In the present day, piracy as such is forbidden. Privateering, on the other hand, is permitted, provided that the plunder be of Garlean origin.[1]

Lominsan anglers come together in numerous loose associations of "pullers" and eke out their living by casting off the coastal cliffs and trawling the open seas.[1]

Whether they be crafting great warships or fishing skiffs, the shipwrights of Limsa Lominsa have no equals within the realm—as they themselves will proudly proclaim.[1]

The art of steel-making evolved alongside the shipbuilding industry and has profited much from Lominsan exchanges with the kobolds who are masters of metallurgy in their own right.[1]

With their considerable knowledge of shipbuilding and seafaring, it was natural that a shipping industry should flourish in the city-state. Many and more are trading vessels that can be seen sailing in and out of port each day.[1]

A settlement initiative has made great strides in providing an honest livelihood for those retired from freebooting, who grow mainly oranges, grapes, and wheat.[1]

Founded by men fleeing the rules of kings, Lominsans continue to see laws more as guidelines than actual rules. Whether pirate or fisherman, citizens generally feel less loyal to their city-state than to their immediate crew. This spirit of freedom ever drives Limsa forward, yet the selfsame wild abandon may appear brutish in the eyes of other Eorzean nations.[1]

Naturally, Lominsan cuisine makes use of the abundant fresh fish and shellfish. The city-state is a favorite of gourmands, as the seafaring culture brings foreign spices and recipes aplenty to the table. Likewise, Lominsan liquors, which were developed to keep on long sea voyages, are famed—particularly the ales and wines, brewed from local wheat and grapes in great quantity.[1]

Though Merlwyb has spent most of her forty-two years joyfully upon the seas, she can scarcely afford to sail the waves as Admiral. Instead, she indulges her second passion-fine wines. It is said her particular favorite is a deep chalice of Lohmani red.