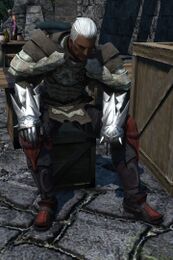 Know this: there is nothing I would not give to take back Ala Mhigo! Nothing!

Ilberd is a Hyur found in Old Gridania.

Born in Ala Mhigo, Ilberd and his family fled their homeland south following the Garlean invasion. Ilberd worked as an adventurer to support his kin until they were lost in a fire that consumed their home—a fire caused by the Calamity. Suddenly alone in the world, there was only one thing left to Ilberd: to see Ala Mhigo reclaimed, and return the remains of his loved ones to their homeland. He rested all his hopes upon his old friend Raubahn, who had become a member of the Syndicate.
A patriotic Highlander, Ilberd enjoys the medicinal teas of his native land. He sparred with Raubahn in times long past, and has since become known as "Ilberd of the Dull Blade." This is due to the ferocious strength with which he fights even at the age of forty-four.
Lionshead: A single-edged sword of unknown origin, Ilberd's arm bears a lion's head upon the guard. He discovered it whilst exploring the Invisible City at the behest of the Thaumaturges' Guild, but as the magi took no interest in the steel, he was allowed to retain it as payment for services rendered. The magicks imbued within the weapon are believed to stimulate the humors, allowing for bladework that seemingly exceeds the skill of the wielder.

Working as a sellsword in Eorzea, Ilberd was brought into the Crystal Braves as a captain. As the captain of the Crystal Braves, he would only be beholden to the Scions of the Seventh Dawn, giving him the freedom to lead his men in the most effective manner. One of his first missions was to track down and apprehend the double agent within the Immortal Flames, known only as The Ivy. Ilberd showed his prowess as a commander and a warrior by capturing The Ivy, who turned out to be none other than Raubahn's right hand, Eline Roaille. He discusses what to do with her with Raubahn, and makes some offhand comments about "abandoning their duty".

In reality, Ilberd harbored a grudge against Raubahn for, in his mind, abandoning his country and people for a life of comfort in Ul'dah. To that end, he joins with Teledji Adeledji in exchange for massive sums of Gil to fund his efforts in the Ala Mhigan Resistance, with many of the other Crystal Braves following suit. He assists the Monetarists in their coup de etat, supposedly assassinating Nanamo Ul Namo and framing the Warrior of Light and the Scions. He reveals himself and his hatred for Raubahn after Teledji mocks the Sultana and Raubahn kills him. When he turns to Lolorito, Ilberd removes his arm in one clean strike, claiming that the years in the city had made him soft. He has Raubahn dragged off to Halatali to await sentencing.

When he learns of the truth behind the "assassination", he attempts to kill Raubahn for being a "traitor" to Ala Mhigo. He is stopped by the Warrior of Light, and tells them they are both pawns in someone else's game. After this, Ilberd laid low for a while, until he was approached by Elidibus, who offered him the Eyes of Nidhogg, stating that only he was worthy to wield them, with his heart full of rage. Ilberd adopts the moniker of The Griffin, and begins rallying people to his cause to liberate Ala Mhigo, planning to convince the Beast Tribes to summon their Primals for their fight. When the Warrior of Light interfered with this, he used the info to launch a false-flag operation against Baelsar's Wall, leaking this info to the Eorzean Alliance so they would have troops standing by to deal with the Primal threat, when in reality this was merely to add credibility that Eorzea was attacking the Wall, since Ilberd had given his soldiers Grand Company uniforms. This ended up being a success, as Eorzea was forced into the conflict against the Empire for Ala Mhigo.

When the Warrior of Light defeated Ilberd at the top of the Wall, he sacrifices himself using the Eyes to summon Shinryu, claiming that "if he needs to become a demon, then he will become a demon. Anything to see his homeland freed". He threw himself from the top of the rampart, and invoked the summoning. This was forestalled by Papalymo sacrificing himself in the same manner that Louisoix did, but ultimately the Primal was too strong, and the Alliance had to turn to Omega to handle the dragon. When Raubahn found his body, he made a promise to see their homeland freed for the both of them.

Much later, when the Warrior of Light and the Scions were exploring The Aitiascope, they came across Ilberd's remaining aether. He stood in their way, but was eventually fully defeated and laid to rest.