"'Tis not for praise that we fight."

Estinien Wyrmblood is the current Azure Dragoon, and mightiest hero of Ishgard. Bearer of the Eye of Nidhogg—an ancient relic plucked from the great wyrm, he wields the power of dragons. Long absent from his post, he has returned to Ishgard to drive back the ancient enemy of his people.Ever since Nidhogg razed his village, murdering his parents and younger brother, Estinien devoted himself wholly to the pursuit of revenge. Orphaned at the age of twelve, he was raised by Alberic, the then-current Azure Dragoon. However, Estinien's relationship with his foster father was complicated—while he respected him greatly as a soldier, he could not help but resent him for failing to protect his village.As of his thirty-second year, Estinien has no hobbies, and he concerns himself only with honing his skills (and occasionally eating anything passably delicious) that he might one day exact his retribution. It was with this single-minded dedication that he overcame every trial set before him and earned the title of Azure Dragoon.As leader of the Knights Dragoon, he is expected to attend various social functions. However, he detests the trappings of high society and has refused on every occasion. For a time, he continued to receive formal invitations as a social courtesy, but that is no longer the case. His disregard for keeping up appearances is perhaps best exemplified by his wild, unkempt hair, which he is content to ignore. Drachen Armor: A dragoon's armor. They say that in Ishgard, the value of a thing is measured in rumors. By that reckoning, the smithing secrets of drachen armor is valuable indeed. Some say the tint of the mythril comes from being cooked in dragon blood. Others whisper that the suit is unnaturally light, that drowning knights who should have been dragged under by its weight sped to shore like eels... Gae Bolg: A spear only granted to those elected by the Holy See to serve Ishgard as a dragoon. Chosen for its light weight and great strength, the dragon bone used to craft the spear is reaped from fields of battle by the kin of the glorious dead. No outlander shall know how such a material is worked, but some say that the bone is kept supple in smoking vats of dragon blood.The Holy See bestowed the legendary spear Gae Bolg upon Estinien after he was awarded the title of Azure Dragoon.

Estinien Wyrmblood is an Elezen found in Coerthas Western Highlands. 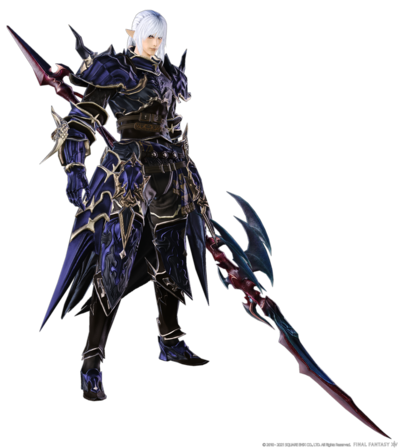