"She sings! She dances! She can help you pay your taxes!"

Tataru Taru is a Lalafell found in The Rising Stones. 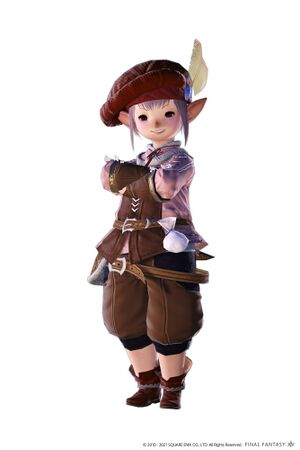 Tataru was born into a wealthy merchant family, yet her time in luxury's lap was not long, for her father lost the family's wealth after a series of poor investments when Tataru was but a child, forcing her into a life of impoverishment. Crooked moneylenders hounding her father at every step, it was during this tumultuous youth that she learned well the value of coin. To help support her kin, Tataru took an apprenticeship at a jeweler's that paid but a pittance. She had but seen twelve namedays. It was during this apprenticeship that she met Minfilia, who had come to the shop to sell rough gemstones. Apparently, Tataru left an impression, for when Minfilia founded the Path of the Twelve, she returned to ask the Dunesfolk woman to join her as coincounter. Believing that through this position she might help prevent others from meeting the same fate as her family, Tataru willingly consented. She thus came to serve as the keeper of the Scions' coin. Now twenty-one, Tataru is also a budding songstress, and is known to sing to herself as she works her sums.

Tataru was amongst those who were captured by the Garlean Empire and Livia sas Junius when they invaded the Waking Sands. She was rescued by the Warrior of Light and the Garlond Ironworks. She returned to the Waking Sands to resume her duties, and would later coordinate the move to Mor Dhona and their new headquarters in the Rising Stones.

Wanting to aid her fellow Scions of the Seventh Dawn more, she attempted to train as an Arcanist, but soon found she was incapable of mastering combat techniques. Though she was upset, she steeled herself and doubled down on her commitment to support the Scions. She wasn't present at the banquet held by Nanamo Ul Namo where the Scions were framed for regicide, and managed to escape to Ishgard with Alphinaud Leveilleur and the Warrior of Light.

In the city proper, she attempted to learn what she could of the city, its people, and potentially the Ascians. Overhearing her asking suspicious questions, she and Alphinaud were held for heresy, where they had to prove their innocence through trial by combat. The Warrior of Light fought in her place and they were cleared of all charges. She continued to act as an information gatherer for them, aiding in gathering anything she could about the potential whereabouts of the missing Scions.

Thanks to her aid, they were able to reunite with Y'shtola, Thancred, and Papalymo and Yda Hext. She provided everyone with new custom-made clothes and weapons designed specifically for them upon their return.

After the incident at Baelsar's Wall and Rhalgr's Reach, Tataru traveled with the Warrior of Light and the others to Kugane, where she continued gathering information. She stayed behind when they moved on to Doma to continue acting as a contact and relaying anything she learned.

After Alphinaud accidentally spent most of the Scions' money, Tataru joined in the investigation of Hell's Lid, hoping to find treasures to earn back everything that was lost. She ended up involved with the Auspices, and witnessed Soroban temporarily lose control and attack them. She did her best in the battle, healing the Warrior of Light's wounds. She was present for Soroban's training as he prepared to become an Auspice, and witnessed the events that unfolded when they sealed away Koryu. For her troubles, she was given a massive sum of wealth to refill the Sions' coffers.

While the Scions were trapped on The First, Tataru aided in watching over their bodies, while also keeping the organization running smoothly, coordinating the efforts of the other members to aid in the fight against the Garlean Empire. When they were returned to their bodies, Tataru remade their gear from The First with the aid of Feo Ul in her dreams. Following the events of Paglth'an, she and Krile sought out Estinien Wyrmblood to join the Scions formally.

After the Scions set out for Sharlayan, Tataru stayed behind to coordinate things in Eorzea. Later, she joined the group in Sharlayan and offered assistance to Krile in her research. When the Final Days descended upon the world, she helped coordinate efforts to take care of the Blasphemies that began appearing, as well as supplies and humanitarian aid to the places that needed it. She worked alongside Ameliance Leveilleur to coordinate the supplies and work for upgrading the Ragnarok, as well as the evacuation of those who chose to evacuate to the moon.

To further aid in the battle against Meteion, she opened up a shop in Sharlayan, and outfitted the Warrior of Light with new gear so they were prepared for the battles ahead. She saw her friends off in the Ragnarok, and prayed for their safety.

When the Final Days were averted and the Scions disbanded, she remained in Mor Dhona, using the Rising Stones as a place for her new career as an artisan.