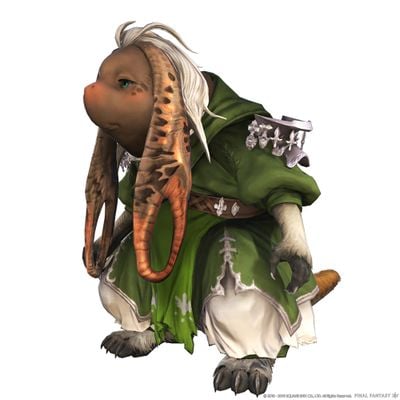 Nu Mou is a Beastmen from Shadowbringers (5.0).

Though somewhat canine in appearance, the Nu Mou are indeed members of the fae, and make their homes in Il Mheg. They are more fairly disposed toward man than their pixie cousins, however, and maintained close ties with the people of Voeburt in its day.

Unlike the Pixie, the Nu Mou loved the mortals who shared their homeland, and acted in an advisory role to the people of Voeburt, offering aid in exchange for rewards that are befitting the work. The Nu Mou are honorbound by a strict code of morals and ethics that lets them derive pleasure from doing the job assigned to them perfectly, doing no more or less than what is asked of them. They are similar to canines not only in appearance, as they have strong reactions to "words of power" issued as commands similar to commands one would issue to a pet (sit, stay, roll over, etc.).

The Nu Mou make their home in Pla Enni, a small cave near the ruined settlement of Wokledorf. The cave is named as such for the large mushrooms they make their homes in and harvest the spores for their concoctions and potions. The Nu Mou that have turned their backs on their revered way of life are known as Lawless Ones. The Lawless Ones refuse to work, and spend their time harassing the Nu Mou and making it hard for them to work in turn.

The Nu Mou have lived in Il Mheg since time immemorial, long before even the nation of Voeburt. They are masters of soul and creation magicks, and are often seen accompanied by a Porxie, magical pig-like creatures made of clay and brought to life. The strongest and most knowledgeable in these magicks is Beq Lugg, an elder Nu Mou who takes residence in the Grand Cosmos.