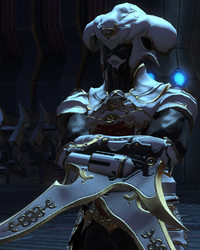 Livia sas Junius is a boss found in Castrum Meridianum.

Tribunus angusticlavius of the XIVth Imperial Legion, Livia is a decorated soldier and proven battlefield commander.

Raised by Gaius van Baelsar after being orphaned by war, Livia devoted herself to the arts of soldiery, that she might repay her adoptive father.

Aglaea, the gunbaghnakhs she wields, are permanently welded to her armor.