Seekers of the Sun 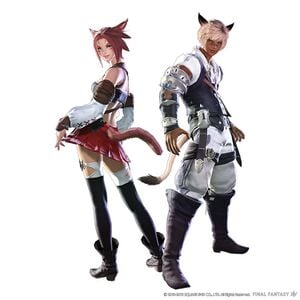 The Seekers of the Sun hunt in the light of day.

The self-proclaimed Seekers of the Sun (サンシーカー族, "San Shīkā Zoku," meaning "Sun Seeker Group") are the diurnal clan of the Miqo'te race. Their preference for the warm light of day pervades all aspects of their culture, as is apparent in their devout reverence for Azeyma the Warden, goddess of the sun.[1] Though relatively few in Eorzea, a small number of them have been accepted into everyday life by the other races in the port city of Limsa Lominsa. Others are known to make their home in Gyr Abania and the Sagolii Desert.[1]

During the height of the empire's might, a Seeker of the Sun named Desch was conscripted alongside his few brethren. The Miqo'te somehow gained the trust of princess Salina and, as the era drew to a close, was entrusted with her blood and the secrets necessary to control the Syrcus Tower. Desch survived the Fourth Umbral Calamity, and members of his family passed down the royal line of Allag through what eventually became the Allagan Eye seen in certain members of the Miqo'te Seeker of the Sun G Tribe.[3]

Not long after their return to the realm, the Miqo'te learned of the new Eorzean alphabet. Tribal seers claimed the fact that the twenty-six letters in the alphabet directly corresponded with the twenty-six Seeker of the Sun tribes that had made the journey across the frozen seas. This convinced the tribes to each take one of those letters into its name.[2]

Even by the time of the Sixth Astral Era, the Seekers of the Sun remained relatively low in number compared to Eorzea's other races. Around the year 980, significant numbers of Miqo'te Seekers of the Sun came to the city of Limsa Lominsa—some in search of a free life, others abducted by and assimilated into pirate bands.[4]

Roughly a head shorter and smaller of body than the average Hyur, the Seekers are blessed with a wiry strength, surpassing agility, and the stamina to run for hours under the blazing sun—a combination of traits that makes them uncommonly suited to hunting in arid climes. As many Seekers are adept at climbing and diving, they also make for excellent sailors.[5] Like the Keepers of the Moon, female Seekers vastly outnumber males.

Among their most striking physical features are their eyes, with their narrow, vertically-aligned pupils and faintly colored irises.[5] It is also not uncommon for their eyes to be disparately colored from birth, a trait considered auspicious amongst their kind.[6] The Seekers are widely regarded as quick-witted and prone to action, and many exhibit a tendency to bore easily.[7]

The Seekers of the Sun are a highly patriarchal culture, with each tribe centered around a strong breeding male (nunh) whose duty is to form a harem and lead his people to glory and prosperity. Young males are born and raised as "tia," and must either assume the position of nunh by challenging and defeating an existing nunh in single combat, or leave the community to find a harem of his own. In particularly large tribes, multiple nunh may coexist in the same community, though such cases are rare.[5]

While not impossible, a Seeker of the Sun choosing his mother's name to be his last, would amount to shunning his culture and adopting the rules of the Keepers of the Moon. There will be some Seekers of the Sun who will respect this, but others who frown upon it.[8]

Since the Seekers first came to Eorzea, there have been some males who, instead of defeating their tribe's nunh and becoming a breeding male by normal means, opt to leave the tribe and form their own. If a male leaves to form his own tribe, he will replace the letter from his original tribe with a new one. Since the twenty-six letters of the Eorzean alphabet are already taken, the new tribal prefix will often be two letters (such as "Ma") which are of the tribe-forming male's choosing. However, it is rare for female Seekers of the Sun to follow these males, so these newly formed tribes almost always die out.[8]

There are tia within the twenty-six existing tribes who, instead of defeating an existing nunh, prove their worth to the tribe by extending its hunting grounds. These tia will venture out into the world and claim territory of their own by either finding somewhere unoccupied, or taking the area by force from another tribe. If they can maintain it for an extended period of time, then they become the nunh of that area while still remaining a member of their original tribe.[9]

This happens quite often, and is far more accepted than merely leaving the tribe to make one's own (which, ultimately, makes that person an outcast). This is why you will almost never see Seekers of the Sun with tribal letters beyond the original twenty-six, as they are few in number and those who exist rarely admit it for fear of ostracism.[9]

Nunh status does not equate to leadership within a tribe and, in fact, very few nunh ever become leaders.[10]

Unsurprisingly, given their self-bestowed clan name, the Seekers of the Sun count numerous devotees of Azeyma, the Warden, among their ranks.[5]

The overall numbers of the Miqo'te are not great, with the twenty-six Seeker of the Sun tribes scattered across all reaches of the realm.[5] The Seekers are most plentiful in Limsa Lominsa, where they account for twenty percent of the city's overall population.[11] They also make up ten percent of Ala Mhigo, though this may not account for the numbers of the M Tribe of the fringes of Gyr Abania and the J Tribe that calls the region's peaks home.[12]

Seekers of the Sun are also found in the Sagolii Desert in southern Thanalan, which is the hunting grounds of the U Tribe—also called the Children of the Sands—who dwell in the Forgotten Springs.[13] A small population of Seekers also dwell in Ul'dah proper, but account for fewer than ten percent of the city's populace (though this does not account for the races of refugees).[14]

A small population of the Y Tribe may have dwelled in Dravania at one point, as evidenced by Y'shtola Rhul and her siblings. It appears that these Seekers were integrated into the population of Sharlayan, and left in the exodus to Old Sharlayan in 1562 of the Sixth Astral Era.

Each of the twenty-six Seeker tribes adopted a tribal name taken from one letter of the Eorzean alphabet, which—be it coincidentally or by divine fate as the Seekers believe—contains the same number of letters. In the female name R'ashaht Rhiki, the "R" represents the tribe, while "Ashaht" is the given name and "Rhiki" a patronymic taken from the breeding male who sired her.[5]

Most male Seekers have simple one- or two-syllable names. Male Seeker names contain no patronymics, and they do not take family names. Instead, they are appended with a title denoting their position in the tribe: "nunh" (pronounced "noon") for breeding males, or "tia" (pronounced "tea-ah") for all others.[5][10]

The extra aitches seen in these names represent a slight hissing or spitting sound that is made when the name is pronounced by the feline Miqo'te. Many of the other races in Eorzea cannot accurately reproduce this sound, so the aitches end up going silent when read.[10]

The tribe names are originally based on traditional beastkin, scalekin, or cloudkin totems, which are said to protect the tribe.[10] The tribal prefixes, their totems, and their pronunciations are as follows:

Other than the tribe pronunciations listed above, names follow rules similar to common English phonics. Though followed by an apostrophe, the tribe sound flows into the name. For example, Y'shtola is pronounced "Yash-toe-lah" not "Yah-sh-toe-lah". Sometimes the tribe letter is dropped from the first name in colloquial speech amongst close friends and companions.[10]

Notable Seekers of the Sun