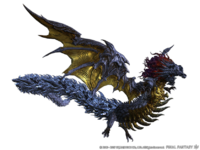 Shinryu is a boss found in The Royal Menagerie.

Shinryu is also a server in the Japanese Meteor Data Center.

A great primal summoned forth by Ilberd Feare, the captain of the Crystal Braves. Unlike other primals called forth, which are embodiments of faith, Shinryu was the embodiment of Ilberd's hatred for the Garlean Empire. This primal is considered an anomaly as it does not have the benefit of being formed by any legend or mythology.

This being was considered a mystery, as unlike other primals there is no mythology or history surrounding this dragon. The Scions of the Seventh Dawn surmise that the reason the primal took this shape is due to the source of the Aether, Nidhogg's Eye. These were given to Ilberd by an Ascian after they were pulled from the swirling tempest under Ishgard. Channeling his hatred for the Empire into the eyes, as well as his life essence, Ilberd possibly channeled his memories of the emergence of Bahamut as well, as the appearance of Shinryu was reminiscent of the wyrm's emergence from Dalamud. Perhaps the most impressive thing about this primal is the fact that it was brought forth by one man and his single-minded hatred for the Empire, and was able to rival-perhaps even surpass-the strength of primals summoned by fervent prayer and deep-rooted faith.

At the top of Baelsar's Wall, after his defeat, Ilberd produced the eyes of Nidhogg. Focusing his deep hatred for the Empire, and using the life energy of those fighting below, Ilberd cast himself from the wall, completing the ritual to summon a primal. What spawned was Shinryu, a dragon heretofore unseen in history or legend. It appeared in a manner similar to the appearance of Bahamut, and fearing the worst, Papalymo trapped the newly born primal in a manner similar to Louisoix's spell to trap Bahamut many years ago.

This was not a permanent solution, however, so the Scions turned to Allagan technology to permanently deal with the beast. Joined by Nero tol Scaeva, the group awoke Omega, a machine created to counter the strength of Bahamut. The machine woke none too early, as just as it appeared, Shinryu managed to break free of its shackles. The two engaged in battle, but a victor could not be determined, as they both disappeared without a trace in a blinding flash of light.

This would not be the final appearance of the wyrm, however, as upon engaging with Zenos yae Galvus at the Royal Menagerie, the crown-prince of the Empire revealed to the Warrior of Light they had found and restrained the primal. He did not wish the Empire to fear primals, as he believed they could be harnessed and used for their own ends. He then joined his Aether to the primals and possessed it, engaging the Warrior of Light in combat. The Warrior proved to be too much for the dragon, even infused with Zenos's intense power, and was stricken down after rejecting Zenos from its body.