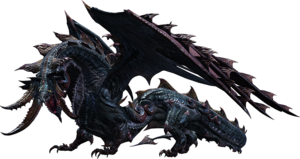 Nidhogg, leader of the Dravanian Horde

The tale of thy kind is one of avarice, treachery, and death—and thou wouldst speak to me of peace? Hark thee, mortal, to the naked truth...then tell me thou deservest forgiveness!

The Dravanian Horde is a sect of Dragons that are native to the land of Dravania. The "Horde" refers to the dragons that are loyal to Nidhogg and his bloody conquest against the sons of Ishgard.

Though a vast majority of the members of the Dravanian Horde are dragons and other skalekin, their ranks are also filled with those who oppose or are unhappy with their place in the theocracy of Ishgard, and wish to change their fate. While some join the scalekin by consuming the blood of Nidhogg, there are those who simply fight against Ishgard by other means, like Lady Iceheart and the heretics she leads.

Before man and history, there were the Dragons, the oldest and mightiest beings on the star. The First Brood were the children sired by Midgardsormr, Bahamut, Tiamat, Ratatoskr, Azdaja, Vrtra, Nidhogg and Hraesvelgr. These Dragons were also referred to as the "Seven Great Heaven Dragons". These Dragons took to the skies and spread across Eorzea.

Unlike other creatures, Dragons can reproduce without the need without a partner. Their lifespans are nigh-on infinite and many view them as mythical creatures. While a dragon is considered the same race as its parent, it will undergo a multitude of metamorphic changes that result in a complete change of its physiology.

Midgardsormr came to Eorzea carrying seven eggs, that hatched to be the First Brood. They grew and took to the skies, spreading across Eorzea. The dragons have dealt with many hardships, including the battle for their homeland against the Allagan Empire, and were even responsible for the first recorded summoning in history after being tricked by the Ascians into trying to revive Bahamut. After the Allagan War, Dragons became scarce in the land, migrating to Dravania.

In the Sixth Astral Era, after the Calamity of Ice, the Elezens migrated to Dravania at the base of Abalathia's Spine where the Dragons had already settled thousands of years prior and held dominion over the land.

The two species warred against each other for over a decade, but the fighting was brought to an end thanks to the efforts of Shiva and Hraesvelgr. After this, the Elezens and Dragons lived in peace for over three hundred years.

But this peace would come crashing down after the betrayal of King Thordan and his knights twelve, who killed the dragon Ratatoskr to take her eyes and claim her power for their own. This sent Nidhogg into a bloody rage, and after he attacked and killed Thordan and most of his knights, he lost his eyes to Haldrath and the remaining knights. He fled back to his home and beseeched his brother Hraesvelgr for one of his eyes. Upon receiving his brother's eye, he swore revenge against the Elezens and their children until they had suffered the way he and his people had.

During the Seventh Astral Era, the Dravanian Horde attacked the city of Ishgard on seevral fronts while Nidhogg rested, including attacking caravans carrying crystals in order to summon the Primal Shiva to help their allies break past Daniffen's Collar, the massive barrier preventing the Horde from entering the city. The heretics managed to break one of the seals, which prompted the horde to send in Vishap, a great warrior dragon to attack the Steps of Faith, but they were ultimately rebuffed by the Warrior of Light and the Scions of the Seventh Dawn.

At Nidhogg's command, the horde attacked Ishgard and several of the outlying towns and villages in the surrounding area, until the final call to attack was issued, bringing the Dragonsong War to a head. Even after his initial defeat and the believed end to the War, Nidhogg's shade possessed Estinien Wyrmblood and called on his Horde, which were still loyal to him. After one final fateful battle with the Warrior of Light which resulted in his ultimate defeat, the rest of the Horde fled back to their mountain home, recognizing that their leader had finally fallen.