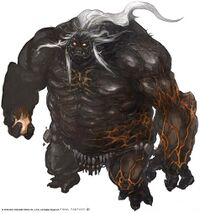 Titan is a boss found in The Navel. He is the lord of the Kobold Beastmen Tribe.

Titan is also a server in the Japanese Mana Data Center.

The indomitable will of the earth made manifest, beloved of the kobold clans.

Compassionate and gentle, Titan is as a father to his tunnel-dwelling worshippers. But woe betide those fool enough to provoke this colossus─for when his anger is waked, the very earth trembles and heaves under the unstoppable fury of his mountainous bulk.

Seeking to provide for an ever-growing population, the kobolds' expansion south of O'Ghomoro clashes with the efforts of Limsa Lominsa to colonize Vylbrand's inland regions. It is said that the beastman prayers which summoned the Lord of Crags were made primarily to beseech their deity for supremacy in this territorial dispute.

In the beginning, the world was a place of relentless hostility. Cold. hard. Unforgiving. The Great Father Titan gazed upon this inhospitable land, and saw that it was in need of custodians. Thus did he mold the ground beneath him, breathing life into soil and clay, and crafted the race of kobolds. But the newborn creatures were not resilient like the rock or the stone, and they could not dwell alongside the savage beasts that stalked the surface.

Seeing his children's frailty, the Lord of Crags sent magma to flow through the holy mount of O'Ghomoro, the molten rivers leaving behind rich veins of ore. Thence did he teach the kobolds the ways of mining and the secrets of smelting, and newly girt with armor and weapons of metal, the beastmen did force the beasts to flee. Greatly satisfied by the success of his guardians, Titan returned to his bed in the mountain's crater. Ere he sank beneath the boiling crust, he left the kobolds with a promise; when his children needed him most, the smoky breath of O'Ghomoro would herald his return.