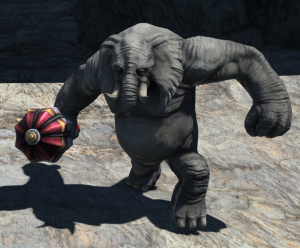 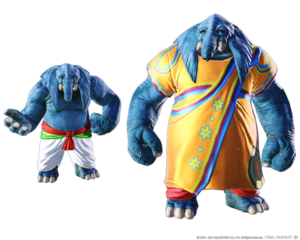 Much about this tribe of mammoth-headed warriors has yet to be properly studied. The most commonly accepted theory places the origin of the Matanga in the Near East, but in recent years they have also been spotted roaming the plains of the Azim Steppe.

The Matanga rival the Gigas in size, and their thick limbs are possessed of enormous strength. Despite their ponderous gait, each step carries them a considerable distance, and outrunning an enraged Matanga across the open steppe is a feat best attempted on horseback.

The unusual vocal cords of these mammoth-like people make ordinary speech difficulty, and even assuming they understand the tongues of men, their pronunciation is nigh incomprehensible. This led to the long-held belief that the Matanga are dull-witted beasts, but research by Near Eastern naturalists indicated their intelligence is not as stunted as first thought. It was also discovered that the beastmen's extraordinary ears can detect sounds below the range of normal hearing, and that they communicate with spoken words combined with a pattern of foot stomps. Certain of their vocalizations are too deep for other races to register, however, and thus a complete understanding of Matanga history, culture, or way of thinking has proven difficult to grasp.

Matanga primarily eat plant matter such as grasses, fruits, and vegetables. On occasion, they have also been seen to consume salt-laden clay or shale, but this is merely a means to supplement the minerals lacking in their herbivorous diet. It is said that Near Eastern warlords once took the Matanga as slave soldiers, and fed them hay laced with potent alchemical concoctions.

A warrior-leader known as the "grand regent" rules over the Matanga herd. This title, however, was one of many which belonged to the king of a now-ruined Near Eastern nation, and seems merely a convenient substitution for the word used in their own language. Much of the tribe's culture is thus lost in translation, with scholars yet struggling to fully define how this authority is decided or acted upon. Under the Garlean regime, the Matanga are not afforded the status of people, their inability to pronounce "civilized" tongues relegating them to the status of slaves or cattle. Following the command of an individual known as the grand regent Anjana, one group broke free of their chains and fled their brutal treatment to the plains of the Azim Steppe, where they now live in a state of conflict with the native Xaela.

Although the reason is unclear, the Matanga despise the Au Ra with a fury. Their hatred runs so deep that when they attack the Azim Steppe natives, it is not for food or plunder, but for the sole purpose of killing Au Ra. Naturally, the proud Xaela natives do not shrink from a fight, and often the would-be slaughterers find themselves cut down in a vicious counterattack. Yet no matter how decisively the Au Ra punish their tormentors, the Matanga return again and again, as if driven by some inexorable force.

Like many hunter-gatherer tribes, the Matanga originally ranged from forest to field, subsisting on that which nature had to provide. They live much the same lifestyle on the Azim Steppe, feeding on wild grasses and other available vegetation. This has proven the source of much hostility, however, as their gathering forays often target the pastures grazed upon by Xaela cattle.