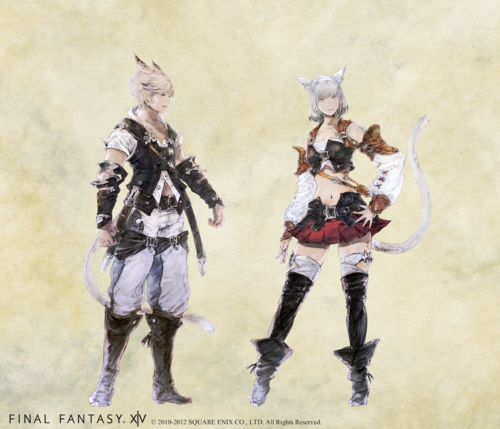 The Miqo'te are nomadic hunters, and one of the less populous races in Eorzea.

Though their presence in Eorzea is lesser than the other races, the Miqo'te (ミコッテ, "Mikotte") are easily distinguished by their large, projecting, feline ears and their restless, supple tails. Their ancestors made their way to the realm during the Age of Endless Frost in the Fifth Umbral Era, traversing frozen seas in pursuit of wildlife. Territoriality causes many of them to lead solitary lives, and males in particular shy from contact with others.[1] For reasons yet unclear, female Miqo'te vastly outnumber males, a unique trait among Eorzea's races.[2]

Adaptation to a hunting lifestyle has fashioned them with a keen sense of smell and powerful legs, with their tail providing them exceptional balance.[3]

On the First, this race is known as the Mystel. Once, the race lived largely in Amh Araeng, where they helped construct Talos and worked together with the Ronso in mining operations. After the Flood of Light, many Mystel moved to Eulmore, though others are found in the Crystarium and the Rak'tika Greatwood.

The Miqo'te are descendants of a hunting people, possibly originating from the southern continent of Meracydia, though this is unclear. They are credited with introducing sesame seeds to Eorzea during their migrations. It is believed by some scholars of Sharlayan that their ancient ancestors were the Mithra.[4] During the reign of the Allagan Empire, they were persecuted and driven from the realm to the far reaches of Ilsabard, though some Miqo'te—such as Desch—were still used as imperial conscripts.[5]

After the fall of Allag, the Miqo'te returned to Eorzea during the Age of Endless Frost in the Fifth Umbral Era, crossing great ice bridges in pursuit of wildlife to hunt. The frozen seas allowed them to move around the massive peaks of Gyr Abania that prevented their return during the Fourth Astral Era. While little awaited them upon arrival, their skill at hunting allowed them to survive until the frost melted. Not long after they returned, they learned of the new Eorzean Alphabet. Those of the Seeker of the Sun clan of Miqo'te, whose twenty-six tribes were equal in number to the letters in the alphabet, declared this divine fate and each adopted a unique tribal name corresponding to each letter.[5][2]

The Miqo'te of today still cleave to their old way of life. The Seekers of the Sun are largely spread out across the realm, with many finding a place as sailors and pirates in Limsa Lominsa. These Miqo'te descend from women and men forced into service by pirate crews. Other Miqo'te dwell in great numbers on the fringes and jagged peaks of Gyr Abania, while a handful also live in the Sagolii Desert in southern Thanalan. The Keepers of the Moon have earned a reputation as poachers in the Black Shroud, but reconciled their differences with the forestborn in recent years. Today, many Keepers hunt in accordance with the Trappers' League guidelines, yet some still face undue discrimination in Gridania.[2] 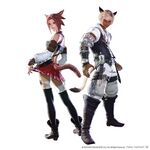 The diurnal, patriarchal Seekers of the Sun are common to Vylbrand and Gyr Abania. 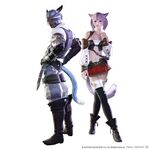 The Black Shroud is home to many of the nocturnal, matriarchal Keepers of the Moon.

The Miqo'te are roughly divided into two clans: the patriarchal and diurnal Seekers of the Sun, and the matriarchal and nocturnal Keepers of the Moon. The former hunt in the day, the latter at night, a difference believed to be due to the unique physical differences between the two.[2]

Within each clan exist numerous tribes, with the Seekers boasting large tribes of numerous family groups and the Keepers possessing small, close-knit tribes of no more than two or three families, though more commonly of a single family unit. Each of these tribes have their own customs, cultures, and hunting methods, and so there is no common set of beliefs shared by all Miqo'te.[2]

Even today, the Miqo'te cling to their old, nomadic way of life and have largely accepted their status as one of Eorzea's less populous races. Fiercely territorial and proud of their traditions, some could consider them unsuited to life in the city-states. Their pride in their heritage as hunters is one of the few common traits among the Miqo'te, who see themselves as part of the natural world and prize the freedom of the hunt above all. As natural-born hunters given to a nomadic lifestyle, many Miqo'te have achieved success as adventurers.[2]

The Miqo'te do not shun death when old age and illness render them incapable of participating in the hunt. That said, they have the means to treat injury, and often use the gel-like substance within aloe leaves to treat severe burns. To the free-willed Miqo'te, the other races' tendency to flock together with their own kind, overrun nature to build cities, and seek safety and stability in laws and alliances seems strange.[2]

When choosing their attire, the Miqo'te value freedom of movement, shunning unwieldy armor that might restrict their range of motion. Their legwear is perforated with a hole for their tail to dangle free, allowing them to maintain their unerring sense of balance.[2]

The hunters of the Miqo'te favor the shortbow, and have contributed to the art of archery as taught by the Archers' Guild.[6]

Despite their nomadic and solitary nature, the Miqo'te adopted the common tongue of the Hyur early on to barter with the other races for materials with which to craft hunting tools and weapons. Remnants of the old Miqo'te tongue can be seen in their distinctive "huntspeak"—a system of tongue-clicks and whistles used to communicate with companions while in pursuit of quarry.[2]