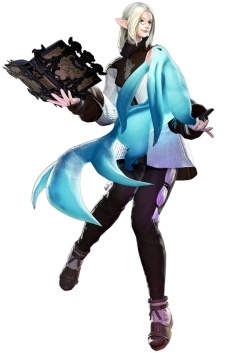 Adepts of the art of arcanum derive their might from symbols of power born of geometric techniques hailing from across the southern seas. Held within occult grimoires, these symbols lend shape to the arcanist's aether, thereby allowing him to produce myriad powerful spells. Using the selfsame symbols to unlock the latent power contained within gemstones, arcanists are also able to summon forth the familiar known as Carbuncle to carry out their bidding.

Arcanists have chosen the path to study the arcane arts. Through the affinity with arcanism they can bring forth minor primals to aid them in battle, while conjuring curses and venom to assault their enemies. As a disciple of magic, arcanists wear cloth armor.

The arcanist is a disciple of magic and wears cloth armor. They use books as weapons. The following crafting classes can create items that are useful to the arcanist:

The arcanist is a rather unique class in that they must specialize into either one of two jobs:

The arcanists can build stacks with aetherflow to cast strong abilities at their enemies. They can also summon minor primals to help them in fight.

Every time the arcanist uses aetherflow, an aether gauge is filled with three stacks. They may then consume these stacks to cast certain abilities which become vital as the class develops into one of the available jobs – summoner and scholar. Arcanist gameplay consists of correctly positioning their pets, coupled with aetherflow management and casting damage-over-time spells.