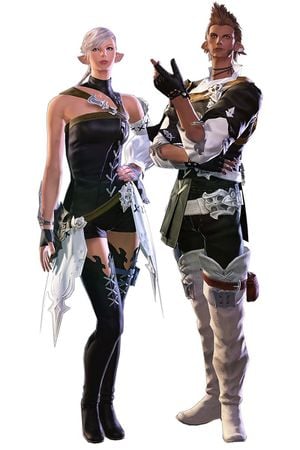 The Wildwood Elezen dwell in forests and cities.

The forests of the Black Shroud have been home to the Wildwood Elezen (フォレスター族, "Foresutā Zoku," meaning "Forester Group") for centuries.[1] They are blessed with extremely keen eyesight[2] and their fondness for law and order has contributed to a reputation for being haughty and argumentative.[1] The clan is also known for its innovative genius, contributing greatly to the carpentry and leatherwork of Gridania.[1]

Among their Duskwight brethren, Wildwood Elezen are referred to as "Greens," for their love of the forest.[3] The name "Wildwood" is typically used to refer to the forest-dwelling Elezen of Gridania, but those of Ishgard share the same common ancestry. As such, Gridania and Ishgard have traditionally enjoyed close relations, with each nation coming to the other's aid in times of need.[4]

After the floodwaters of the Sixth Umbral Calamity abated, the ancestors of the Wildwood Elezen first dwelt upon the plains of central Aldenard.[4] However, around the middle of the fourth century of the Sixth Astral Era, the first of three migratory waves of Hyur came to Eorzea.[5] Displaced from their ancestral home, they migrated to Coerthas,[4] where they came into conflict with the dragons of Dravania.[6]

The second wave of the Great Hyuran Migration came around the year 660 and forced even more Elezen from central Aldenard with their burgeoning population. These Elezen sought refuge within the forbidding forests of the Black Shroud. To their dismay, the Hyur began to colonize the Shroud as well in the early eighth century, leading to territorial conflict over the forest's resources. Decades of conflict began to settle around the year 740. Realizing that they shared a common enemy in avoiding the elementals' hostile gaze, they put aside their differences and founded the subterranean city-state of Gelmorra.[5][7]

For three centuries, Gelmorra prospered beneath the Shroud, but after the Ixal were expelled from the forest in 1020, a new opening presented itself. The Hyur of Gridania managed to create conjury and commune with the elementals. By 1077, the sylvan city-state of Gridania began construction.[7] However, many Elezen retained their attachment to their subterranean home and chose to remain behind, becoming the ancestors of the Duskwight clan.[8] The formation of Gridania brought many more Elezen to the forests, drawn to the cosmopolitanism of the city.[3]

Wildwood Elezen are slender of body and long of limb, with males and females often reaching heights of greater than eighty and seventy-seven ilms, respectively. With lifespans one- or two-tenths longer than their fellow races, their physical maturity is somewhat delayed. It is not uncommon for Wildwood children to look up to their Hyuran friends in their early teens, only to outstrip them around the age of twenty.[4] They are known for their sharp eyesight—a contributing factor to their famous talent for archery[2]—even compared to their Duskwight cousins.[9] Owing in part to their large ears, they possess a sense of hearing keener than other races'.[4]

Living a nomadic existence on the plains, the ancestors of the Elezen originated the art of archery to protect their lands and livestock from outside threats. From the strings of the bow were born stringed musical instruments, and song and poetry in turn. Their long and graceful limbs also lent themselves to dance, and the myriad manifestations of Elezen art and culture quickly spread to the surrounding lands and peoples. The Elezen were also pioneers in fashion, their unique tanning techniques and exquisite accessories earning great renown across the land.[4] Their innovative genius also extends to the art of carpentry, as displayed by Gridania.[9] The Elezen of Gelmorra and Ishgard also reveal a particular proclivity for stonemasonry, and the Elezen of both Gridania and Ishgard generally enjoy the comforts of urban life.

Wildwood Elezen make up about thirty percent of the Gridanian populace.[10] The Elezen of Ishgard—who share ancestry with them and are often considered to be the same clan—are the majority demographic of their city and account for seventy percent of its population.[11]

Wildwood (or Wildwood-like) Elezen were also found in the Sharlayan colony before the scholars' exodus, and still dwell in Old Sharlayan. Their population figures are unpublished in the interest of equality, and are thus unknown.[12] A small population of Wildwood-like Elezen exists within the Garlean Empire as well.[13]

While the Elezen adopted the common tongue eras ago, remnants of their old tongue can be seen in the spelling and pronunciation of their names, which speaks to the importance they place on tradition.[4] While the structures and spellings of the names are extremely similar, and they follow the same phonetic rules, a Duskwight and a Wildwood Elezen will never have the same last name. Due to generations of bad blood between the two clans, the surnames once commonly used by both have been claimed by one side or the other.[14]

The spelling and phonetic rules are extremely similar to those of French, and while there are no set-in-stone guidelines for male or female names, there are some distinguishing features.[14] Male names are typically lengthy, often ending in the syllables "-oix" (pronounced "o-ah"), "-aux" (pronounced "oh"), or a silent "t" ("mont," pronounced "moan," and "geant," pronounced "john"). In contrast, female names are often shorter and regularly end in diminuitives such as "ne," "ette," "elle," and "ie".[4]

Upon close examination, similarities between Hyuran (Louis, Hilda) and Elezen (Louisoix, Hildie) given names can be observed. While some scholars attribute this to a common ancestry shared by the two races, such theories have been roundly dismissed by the proud Elezen.[4]